Nobel spies on his competitor, Rockefeller

When Robert Nobel realised the possibilities of oil extraction in Baku on the Caspian Sea, oil management was very primitive. The oil was scooped out of the wells by hand and transported in wooden barrels on carts pulled by donkeys. So, in 1879, Robert Nobel sends his colleague, Törnqvist, to the USA to obtain information about modern pipelaying at his competitor, Rockefeller’s, plants in Pennsylvania.

A problem in Baku was the ancient methods of extracting the oil and transporting it in barrels to the refineries at the harbour. Using horse and cart (arba), the transport of 1 pud of oil cost 35 Russian kopeks but just under 3 kopeks by pipeline.

As a result of their Russian colleague’s reports, the chemist, Dimitri Mendeleev, from his trip to the USA in 1876, the Nobel brothers knew that their competitor John D Rockefeller had been using ”pipelines” in Pennsylvania since the 1860s.

In February 1879, Robert Nobel requested his colleague, Törnqvist, to study transport by pipe and everything to do with the industry in the USA. ”Ultimately, it would be desirable if Your Highness could, without mentioning our name, obtain the most recent price details for drilling tools, all kinds of pipes, steam boilers and the necessary machinery from the largest and best factory companies.”

In his engineering works in St Petersburg, Ludvig constructed steamdriven pumping stations that were necessary in order to modernise Robert’s oil industry. Ludvig ordered stronger pipes from the iron works in Glasgow in Scotland and sent his works manager, Alexander Bary, to study how the pumps and pipelines worked in Pennsylvania.

Ludvig wanted to use pipelines in Baku, but the city’s authorities were concerned about the people’s reactions. The numerous and poor donkey drivers and barrel makers risked losing their jobs – and that could lead to social unrest. Ludvig’s proposal to lay the pipelines on the state’s land met, therefore, with resistance from the local political leaders but he was given permission by the government in St Petersburg.

The pipelines from Glasgow were delivered in 1877 and were buried two metres down to avoid sabotage attempts. From the drilling towers, they ran together at a large pumping station where smaller pumps were connected between the fields and the refinery at the harbour. But – just like in Pennsylvania ten years earlier – this led to unrest. According to Robert, ”midnight raids were launched on the pumps” by angry donkey drivers and barrel makers who had been put out of a job. The Cossacks had to guard pipelines and pumping stations.

In March 1878, Ludvig writes to his brother, Alfred, in Paris that work at the factory is going splendidly. ”The great rewards I have been able to hand out for the past year raise the spirits and working capacity of my servants. Profits should be at least double what they were in 1877. Emanuel now seems to be playing a very lively part in the business and reports by letter once a week on the situation with a great deal of clarity and in well composed words /…/ this makes me hope that he will become a serious man and that what I have started will not then need to fall into decay.”

Robert has made a profit of 4,000 roubles ”You can imagine how much this will please him and raise his spirits. /…/ personally I am so tired about money these days that 4 000 more or less has no effect on my mood.”

Bilderling has invested 300 000 and Ludvig 1.000 000 roubles. Ludvig appeals to Alfred to contribute to the company: ”For me and for Robert, it would be very much welcomed if you could contribute some more considerable sum, because then I would be in a position to continue with the development of the company until such time as it is a fully-developed creation, before needing to turn to others and larger capitals.”

Ludvig wants to form a limited partnership according to the Russian model, but it is Alfred’s demand for a limited company that makes it possible to get the necessary capital injection in the future. In 1879, Petroleum Production Company Nobel Brothers Ltd, telegram address BRANOBEL, is created.

The company was able to recoup the money it invested in the pipeline within a year. Many of the oil producers eventually connected up once they saw what they had to gain. Ludvig also built pipelines for other companies, something that became very profitable.

The transport of oil with horse and cart, so-called “arba”, was expensive. This made the Nobel brothers look around the world for alternative ways of transporting the oil. 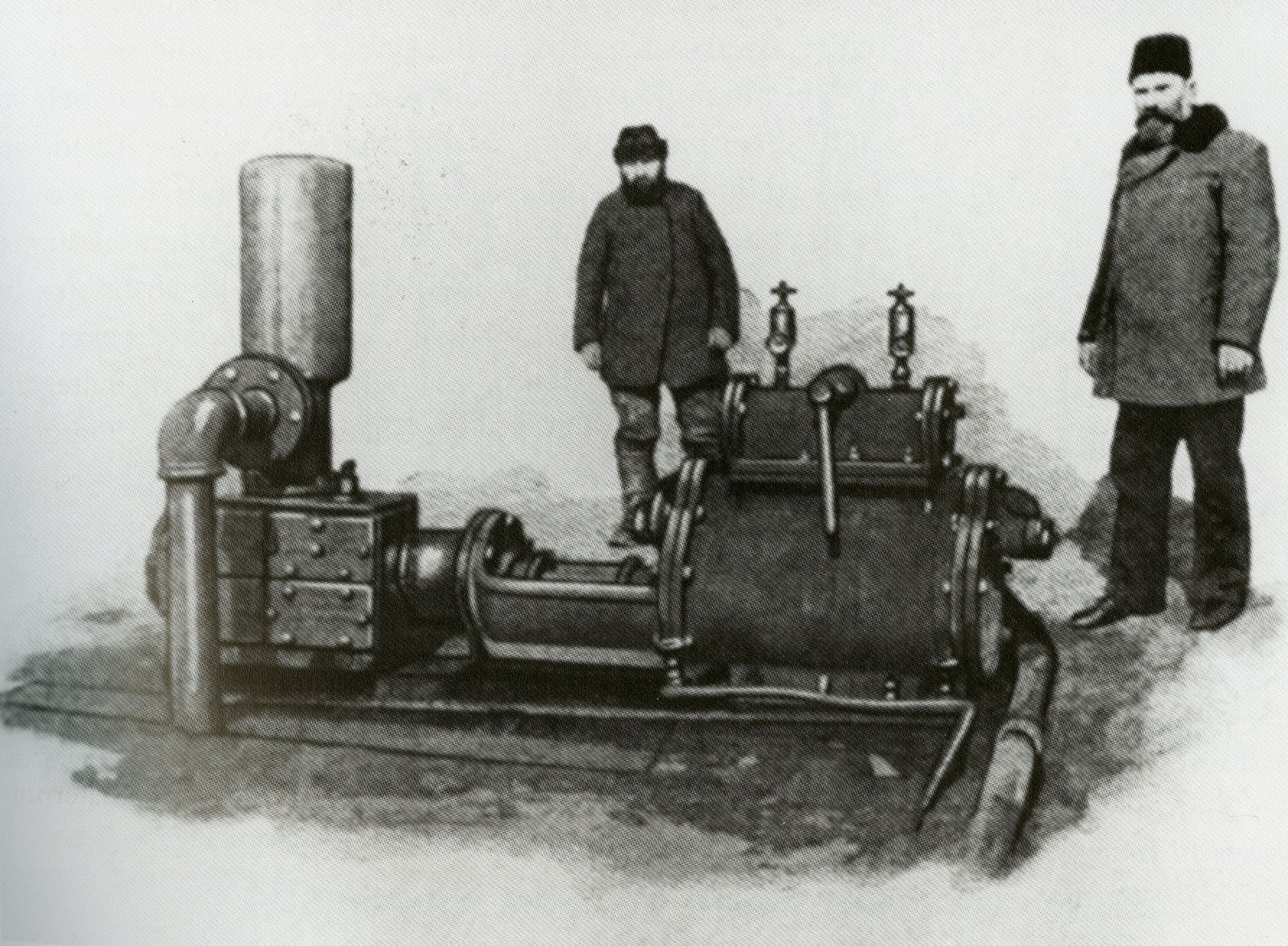 Ludvig Nobel, to the right in the picture, and the oil pump he constructed. The construction was made although the authorities of Baku had voted against pipelines in the city.