Ludvig Nobel took a great interest in improving working conditions. He reduced working time and opened up pharmacies and hospitals. However, the managerial jobs were almost always given to Swedes.

The main thing distinguishing the Nobels from the other oil barons was that they created better conditions for their workers. They reduced working hours from 12 hours to 10.5 hours, improved living conditions and arranged rooms for prayers and religious ceremonies for Muslim workers. In addition, the Nobel Brothers lent their workers money to build houses and opened pharmacies and hospitals for them. The Nobel brothers invited skilled engineers, economists and scientists and offered them higher salaries. However, managerial positions were always given to Swedish specialists, and Muslims and Russian workers were never appointed to responsible positions.

Ludvig Nobel was frequently in contact with his workers, following the principle that “the labour of workers must be regularly paid and duly appreciated” and he commended this principle to others. Ludvig Nobel was thorough in all his undertakings. The buildings constructed by him for his workers and technicians in Baku’s suburbs still exist today. Despite all the years, these buildings are in better condition than most others.

Ludvig Nobel was against receiving money that was not earned. He repeated the proverb “a man must sing for his supper”. He never played the stock market. He refused many offers to sell his business to foreign companies saying: “Do you want me to turn my money into securities, get a pair of scissors and rely on the stock market by cutting coupons? I cannot accept that. I need not only money, but also my work.”

In order to attract skilled specialists and ensure the necessary conditions for their work and social life, Ludwig Nobel initiated the creation of a beautiful park in the Black City suburbs [faktaruta 1] on wasteland. This beautiful park, called “Villa Petrolea” or “Oil Villa” was created during the years 1887 and 1888. By importing various plants and trees – many from the Lankaran region [faktaruta 2], Tbilisi and Batumi, Russia and Europe – he was able to create a huge “green ensemble” of more than 80,000 plants and trees. The pools with fountains were also used to store fresh water. Offices, comfortable residential houses for scientists and engineers, a theatre, library, canteen and billiard rooms were built around the park. The soil for the park was imported from Lankaran, and fresh water from Astrakhan [faktaruta 3]. The park was designed and created by the well-known European botanist, E. Bekle. The construction of Villa Petrolea cost 250,000 roubles, an incredibly large sum at that time. The park is still there, today called Nizami Park. 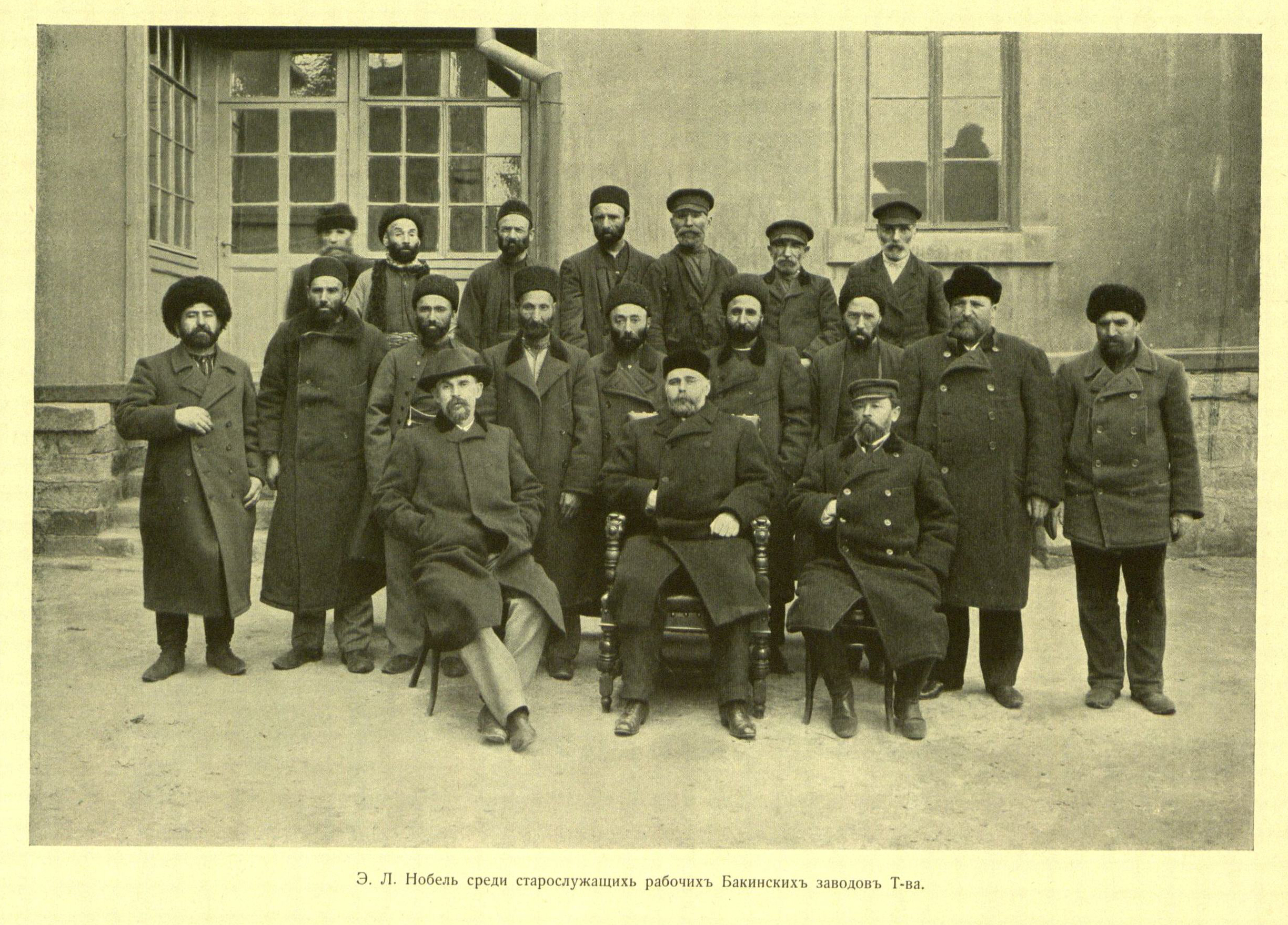 Emanuel Nobel sitting in the centre on the chair, surrounded by the old officials at the Baku office of Branobel.

Such horse-drawn carriages called “konka” helped with free of charge transport of workers to their working places on the other side of the town.