The diesel engine – a leap forward in fuel economy

Start » The diesel engine – a leap forward in fuel economy

The methods to produce mechanical power were rapidly developed in the late 19th century. The steam engine had dominated the market, but different types of combustion engines were now made available as stationary or mobile power sources. One of the developers was the German engineer Rudolf Diesel.

The Mechanical Factory Ludwig Nobel was founded in 1862 in St. Petersburg. Its experience and line of production came well in hand as the oil rush erupted 1874 in Baku, where Robert Nobel bought a refinery. During the years drawings and equipment were exchanged frequently between Baku and St. Petersburg.

Ludwig Nobel’s death in 1888 lead to the factory taking on a new direction. A deep recession marked the end of the 1880s in Russia and also in many other important industrialized nations. Ludwig´s son Carl held a degree in engineering from the Royal Institute of Technology in Stockholm. As Carl, at the age of 25, took responsibility of the factory, he was well aware of the need to find new ways to stay in business.

The main source for heating and creating power had for the past hundred years been the steam engine. Now, a new engine had been constructed, the paraffin engine, which utilized paraffin, or kerosene. Carl Nobel signed a contract with a workshop in Switzerland for the rights to build a series of 3, 5 and 7 horsepower engines. However, these engines were small and in constant demand of maintenance. After modifications and improvements, one of these engines could produce 10 horse powers.

When Carl Nobel died in 1893, work on improving the paraffin engine was still ongoing. His elder brother Emanuel Nobel was effectively heading both the factory and the Nobel Brothers Oil Company. The factory was run by Kauffman and the staff, whom among them was the young Swedish engineer Anton Carlsund, employed in 1892.

Preparations for the All Russian Industry- and Arts exhibition in Nizhny-Novgorod were under way in 1896. The Mechanical Factory Ludwig Nobel was regarded as one of the best in the manufacturing of steam engines, steam boilers, pumps, paraffin engines, ventilators, electric fittings as well as axles and wheels. Anton Carlsund prepared the exhibition and was later sent by Emanuel to Baku and to Europe to study combustion engines – what was new?

During the 1890s, work was in progress in improving combustion engines. The gas engine was adapted to cars and paraffin engines were built for running on both heavier and cheaper petroleum products. Anton Carlsund was a member of the Verein Deutscher Ingenieure. This organization held its yearly meeting in Kassel, Germany, in which Anton took part. Here, he listened for the first time to Rudolf Diesel, who explained the construction of a new engine, described by him already in 1893. The cylinder was to compress pure air to a very high pressure and the fuel was to be injected into the cylinder, but only as the first part of the compression was completed. The combustion was to be controlled in such a way, that the temperature remained constant from the beginning of the expansion. Diesel suggested a very high pressure, for example 100 atmospheres and pulverized coal for fuel.

At the yearly meeting of the Verein Deutscher Ingenieure on June 16, 1897, Rudolf Diesel demonstrated a prototype built in Augsburg, which was run by paraffin. Producing 20 hp, it used only 225 grams of fuel per hour and horsepower, while other combustion engines used almost twice as much. Compression occurred at 30 atmospheres, and neither carburettor nor any device for ignition was needed, resulting in the exhaust being practically smoke free.

The result exceeded what previously had been achieved with any engine. The patent rights were valid for Germany only, factories in other countries had to negotiate for the right to construct the engine and name it a Diesel. By September 1987 only one engine worked properly. But Diesel believed it to be suitable for ships and workshops, which made engines for cars, and for trams.

This became the starting point for a thriving diesel engine industry in Russia.

The inventor of the diesel engine, the German engineer Rudolf Diesel. 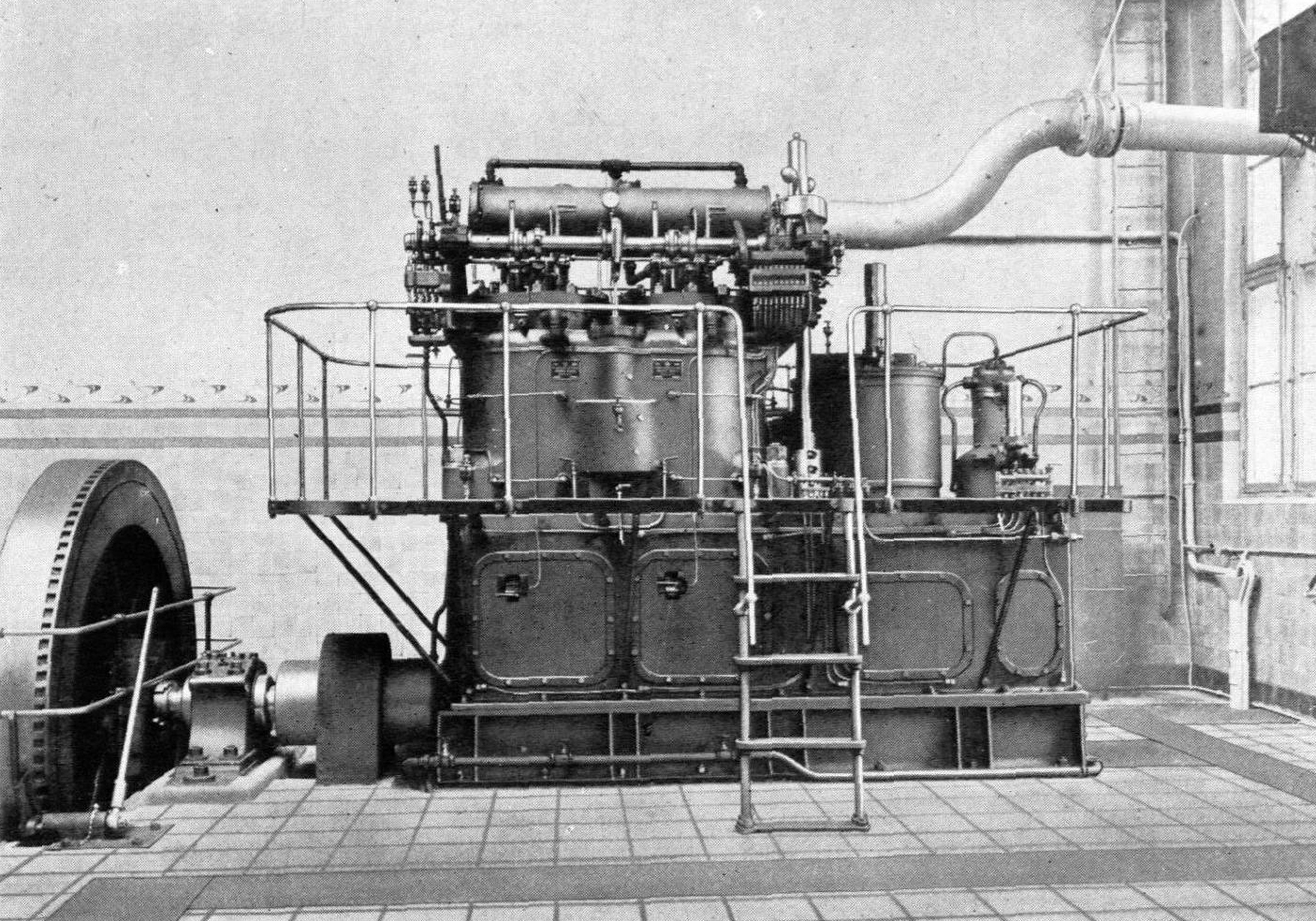 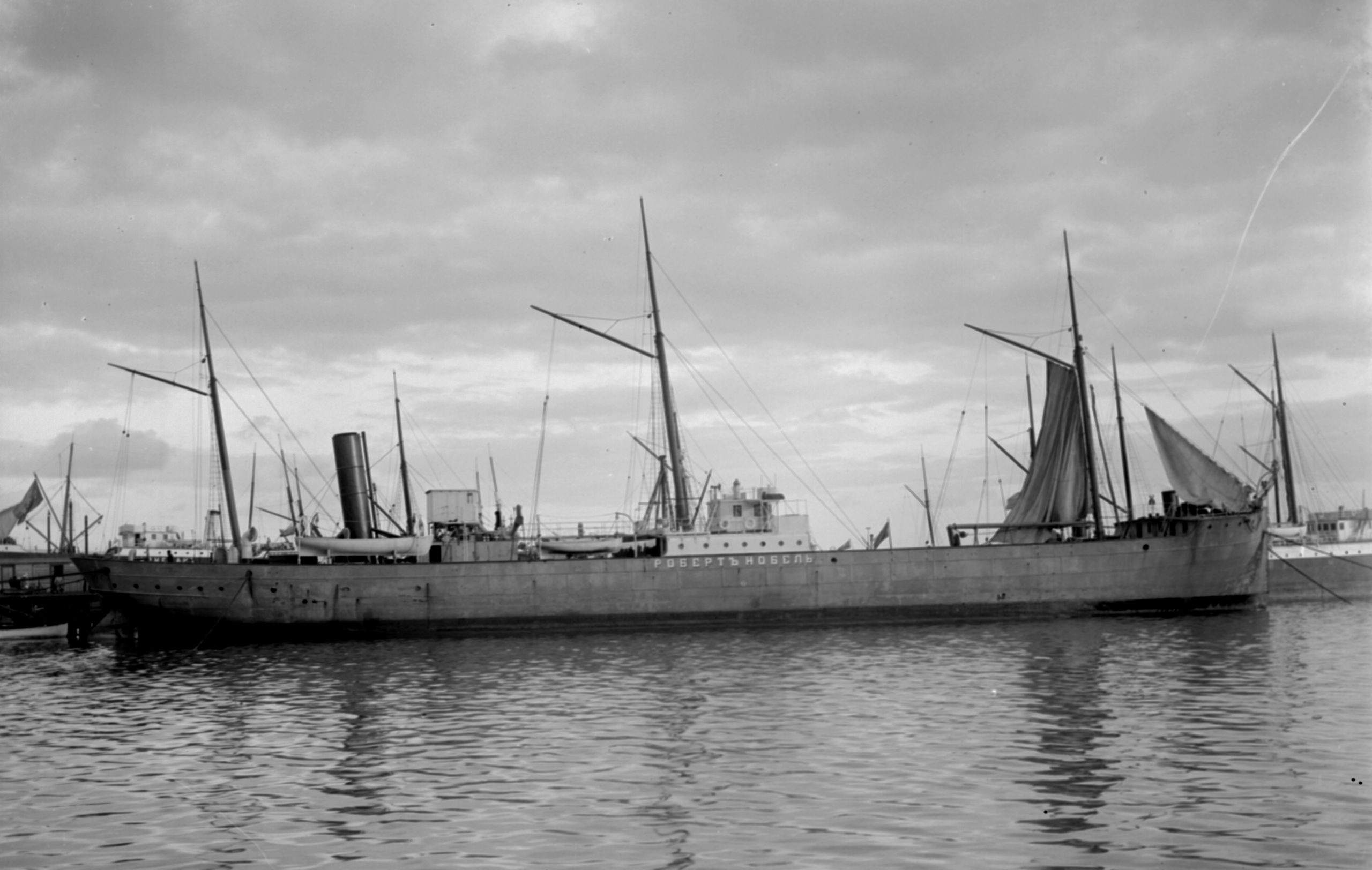 A steamship, possibly retrofitted with a diesel engine. Rudolf Diesel believed the diesel engine would eventually be suitable for larger ships.