The dream of a small paradise…

Start » The dream of a small paradise…

On 24 September 1884, Ludvig Nobel writes a letter to his daughter, Anna. He is happy about the acclaim he has received for his own endeavours to create a good life for his employees in the ”Villa Petrolia” residential suburb. But the water needed to realise his dream of a green oasis in the semi-desert of Baku is still lacking.

”… Often, yes, perhaps you think too often, you have heard Baku mentioned. For us, Baku is, of course, a constant topic of conversation. You probably know that it is usually very hot here and the severe sand storms are very unpleasant and that, in between, the air is full of thick clouds of smoke and unpleasant vapours from foul-smelling oils – but I don’t think that I have mentioned that, for part of the year, i.e. the autumn and spring, the weather is divinely beautiful and that there are places here where you are untroubled by smoke and foul-smelling vapours and where the air is always pure and fresh”, Ludvig writes and continues:

”One such place is the district where I have had my small residential suburb built, to which I have given the name, Villa Petrolea, and where a large part of our employees are housed. That is where I now live with Carl and Hjalmar in a house intended for the Main Administrator. Since the house is a big one and Herr Törnudd is alone and has no family, we have sufficient space. Several families and a number of bachelors are living in the other villas. You know some of them, such as Rydén, Roman, Holmström, Lambert.”

Ludvig also writes: ”In one of the large buildings, there is the club, where the entire colony gathers almost in full numbers on Wednesday and Saturday evenings to play music, dance and play billiards. We have come up with the successful idea of forming a musical corps, a real orchestra that has already achieved a rather remarkable degree of virtuosity. The orchestra consists of 15 people playing. The conductor and teacher is an excellent musician who has been head of the navy’s music corps here for many years. Over a period of a year, our dilettantes have made such progress that they have won great approval by giving concerts for the benefit of charitable purposes. The newspapers that have spoken of this call them the Nobel Orchestra”, Ludvig points out proudly and continues:

”I was of course invited to listen to a concert in the club. There was a party atmosphere everywhere to honour me. They played March of the Björneborgers, sat me in a chair and carried me high in the air around the large hall the entire time that the march was being played. Then they drank to my health from a large bowl and speeches were given, in which they thanked me for having the idea of bringing about a pleasant life for those in our service. All of this has given me immense pleasure because I had had a great deal of trouble before succeeding in getting all this ready and when I now see that everything has been a success and that our employees have a pleasant and healthy life and that they acknowledge that I have done so out of goodwill, I feel great satisfaction in my heart and feel that I have ample compensation for my troubles and my pains.”

But one thing is still lacking before Ludvig is content: ”I had constructed the residential suburb in the hope of getting some greenery around us, but, unfortunately, I have not succeeded in this because there is no water. All we have been able to achieve is flowerbeds and a scrap of a vegetable garden. In the summer, the fields are dry and scorched by the sun. It never rains then. In the autumn, winter and spring it again rains often. Then we have glorious greenery here and the air is full of delightful aromas. Last night, the first rain fell, which has been eagerly awaited for a long time. The asters and stocks have benefited particularly well from this and are already lifting their powerful clusters of flowers very proudly upwards. For next year, I hope we will be able to supply ourselves with a better supply of water and then, with God’s help, my dream of a green Villa Petrolea, a small paradise in Baku, will become a reality”, Ludvig writes hopefully.

Villa Petrolea became a real oasis, a sight worth seeing in the tropical summer and infertile semi-desert that surrounded Baku. The gardens flowered with the help of humus from the fertile landscape around the city of Lenkoran, to the south, and irrigation from the Volga. Drinking water was arranged first by means of fresh water processors and, later, a fresh water pipeline was laid from springs in the mountains. At the beginning of spring, boats collected 800 tonnes of ice before the summer season. 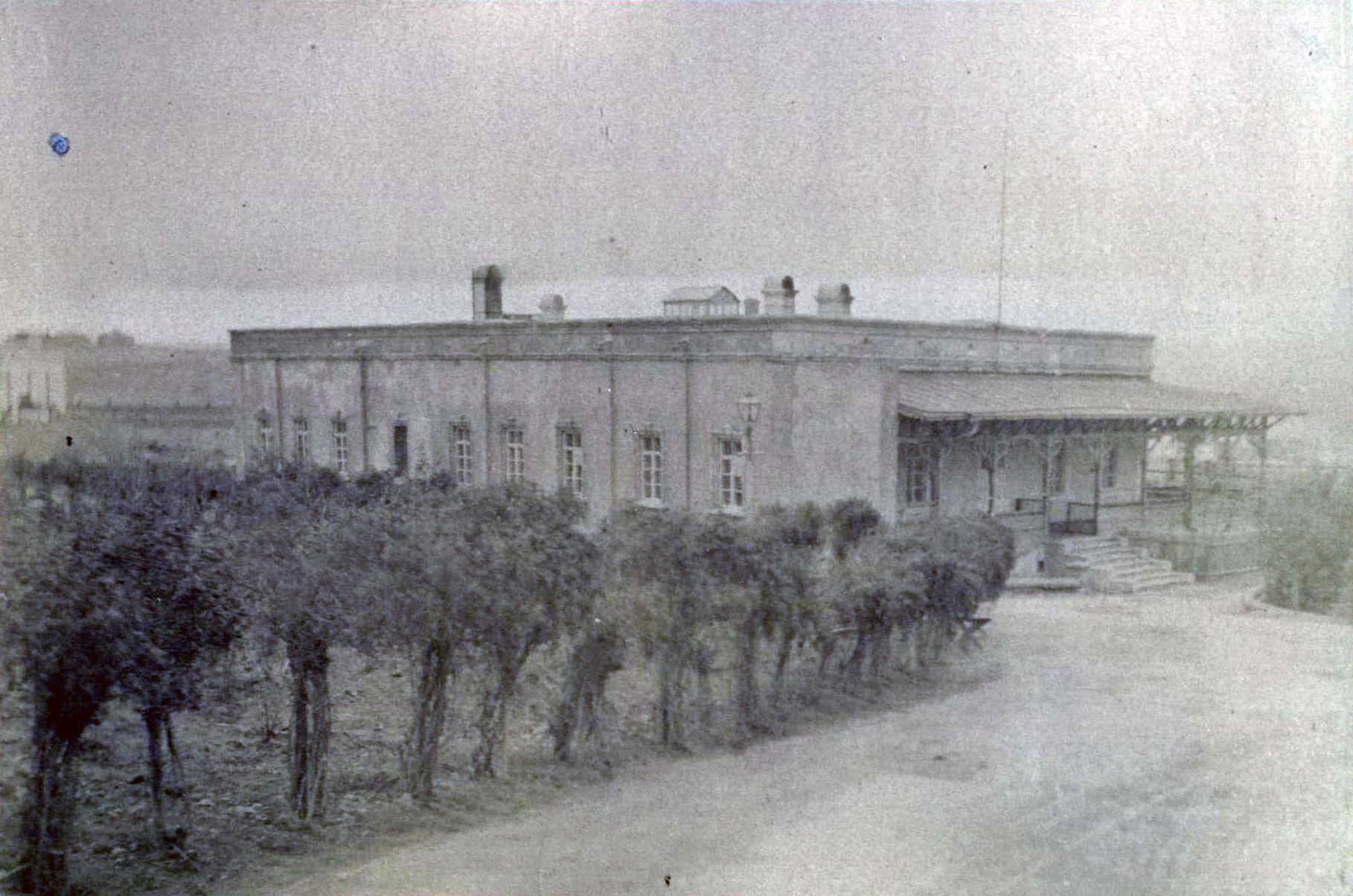 In 1884, Ludvig Nobel visited his paradise, Villa Petrolea, in Baku. 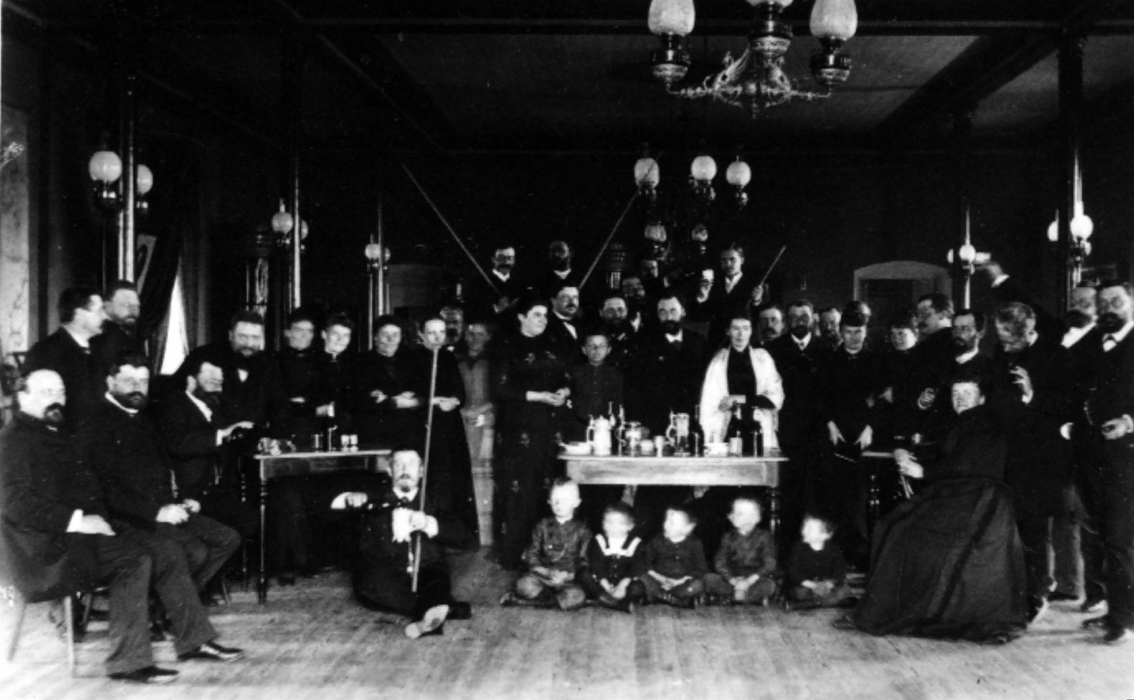 On Ludvig Nobel’s visit to Baku, a party was thrown in Villa Petrolea’s clubhouse, and the Nobel Orchestra played for Ludvig in splendid form. The photo shows the guests in the clubhouse on a party evening typical of the period.