In 1970, 90 years after the foundation of the company and 50 years after its nationalisation, the end finally came. The remains of the huge oil empire had been managed, and reasonably protected, through two major wars. Ultimately, there were still assets worth close to SEK one billion.

The liquidation of the family of companies around Branobel took time. In 1934, the Branobel company had been sued by a group of bondholders in France for a loan that Emanuel Nobel took out with Deutsche Bank in 1904 and which should have been repaid in 1928. The plaintiffs were not demanding payment for their now worthless bonds; rather they intended to force the company into liquidation and a sale of assets that would be divided up between creditors and shareholders. Nobel responded that the company was Swedish, and therefore could not be brought before a French court. Swedish and French lawyers were engaged and the judgement was appealed against at a higher court in 1936.

An AGM was held on 22 February 1938, but the company’s assets could not be sold during the world war. A lot were sensitive, such as wealth, and material was probably hidden away to avoid falling into the wrong hands.

At the end of the war in 1945, Gösta Nobel tried to convert the company’s remaining assets into cash. A significant proportion were Finnish government bonds. At this point, Gösta became involved in an unpleasant process in London that had a severe effect on him. He died in 1955 without getting to see the end of the process, or the company’s liquidation.

The company now had no board, as both Wilhelm Hagelin and Arthur Lessner had already died. Branobel’s finance manager, accountant Oscar Kristoferson, and lawyer Harald Almer succeeded in initiating a settlement process in London, and organised a meeting of former shareholders in May 1959, which, by a sufficient majority, decided to liquidate the company. Harald Almer died, however, and it was left to Nils Oleinikoff to lead the meeting on 3 June 1964. Nils Oleinikoff, grandchild of Ludvig Nobel and son of his daughter, Marta, was the fourth generation of Nobels at the helm of what was left of the Brothers Nobel’s oil company by its end.

A liquidation meeting was held in 1965, but due to formalities involving shareholders who did not have certificates or shares, the final meeting had to be postponed until 24 March 1970. At that point, the assets could be divided up, with a five-year appeal period. Funds were reserved for this. An initial division of the residue of SEK 9,253 million took place in Switzerland somewhat later. This had been determined on 3 June 1964 with the intention of executing it in 1969. In the same year, 1969, some of the Finnish bonds were redeemed luckily enough, and the money from that could be included in the residue.

The initial period in exile after the Bolsheviks seized power was difficult for the Russians who had been in the service of the company and the Nobel family. Most ended up in Paris. The Swedes and Finns who returned to their home countries found it difficult to find new work and the company’s board offered them support and pensions as long as they could, ultimately offering them a one-off sum.

In Stockholm, the Swedish government set up the “Russian Investigation Commission” which, between 1922 and 1923, tried in vain to secure compensation from the Soviet regime for lost property in the old Russia. Some of the Swedes making claims were Edla, Gösta, Emil, Ludvig and his wife Louise, Mary, Rolf Nobel and Anna Sjögren. It was a question of compensation worth millions of roubles – for property, companies, bank funds, bonds and shares.

The Nobel family retained their summer residence, the Kirjola estate, outside Viborg in south-eastern Finland. During the Second World War, valuables were successfully removed from there and, in part, buried in part of the garden before the house was set alight by withdrawing Finnish troops who did not want the house to fall into Russian hands.

Many objects that the family acquired in Russia have since been sold at auction. Russia’s new capitalists have bought “back” valuable art and jewellery, such as the Fabergé clock Emanuel Nobel ordered for the paraffin company’s anniversary in 1906. One surprise was that Marta Nobel-Oleinikoff had bought Hungarian government bonds before the years of revolution and when these matured a few years ago, it came as a complete surprise. Erik Delin’s and Gösta Nobel’s silver objects still lie buried, somewhere in a plot of land in Baku. 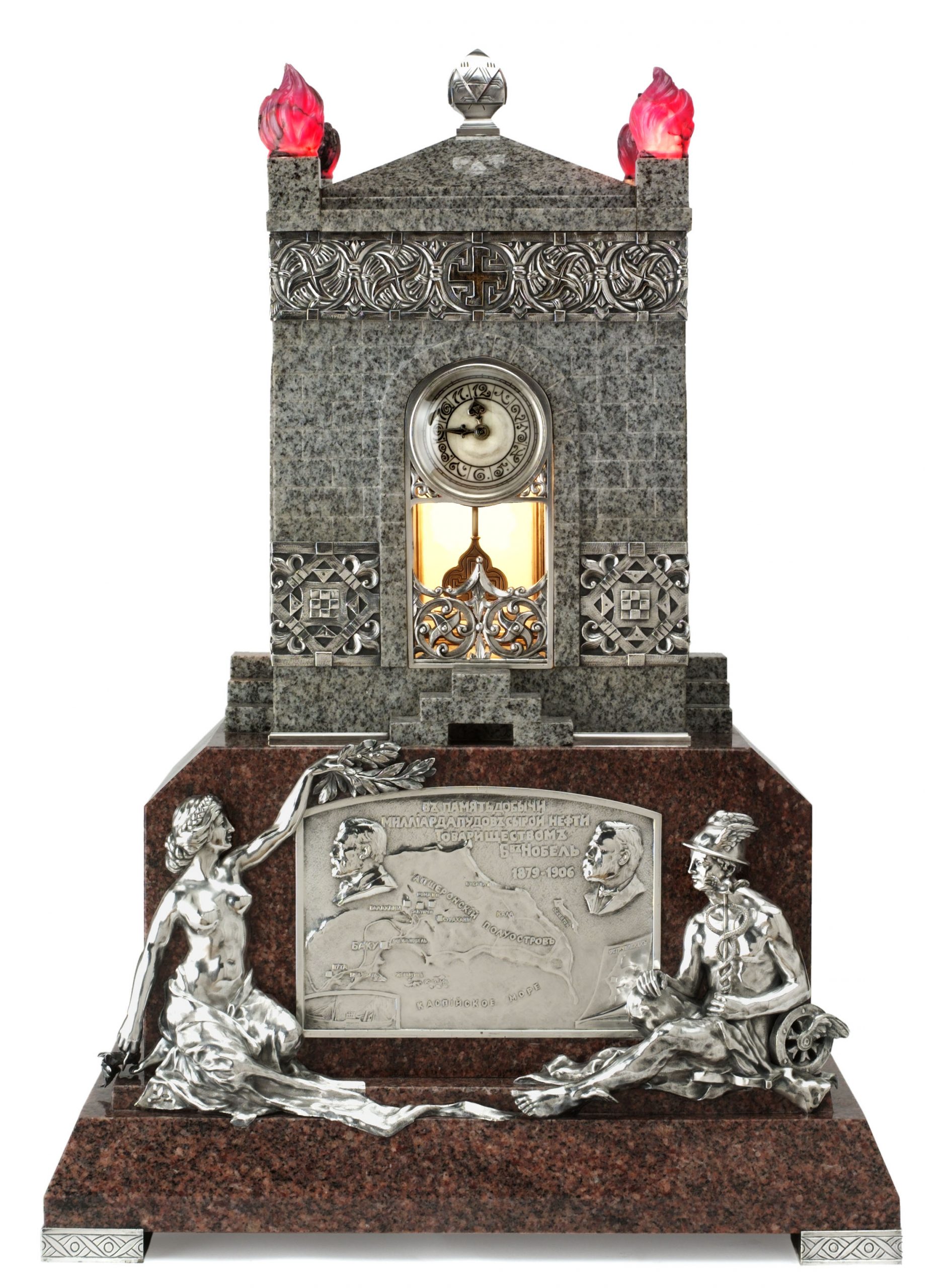 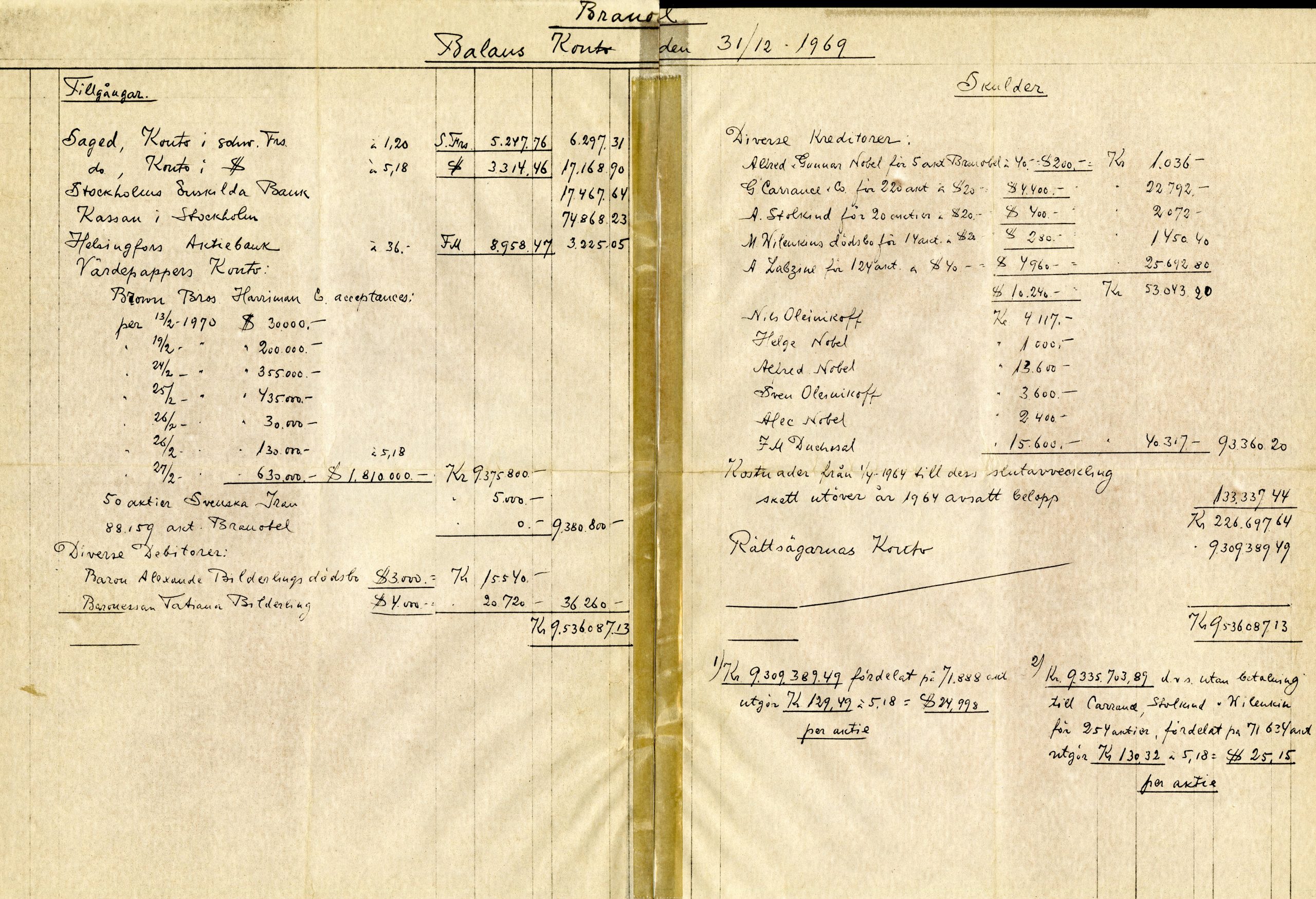 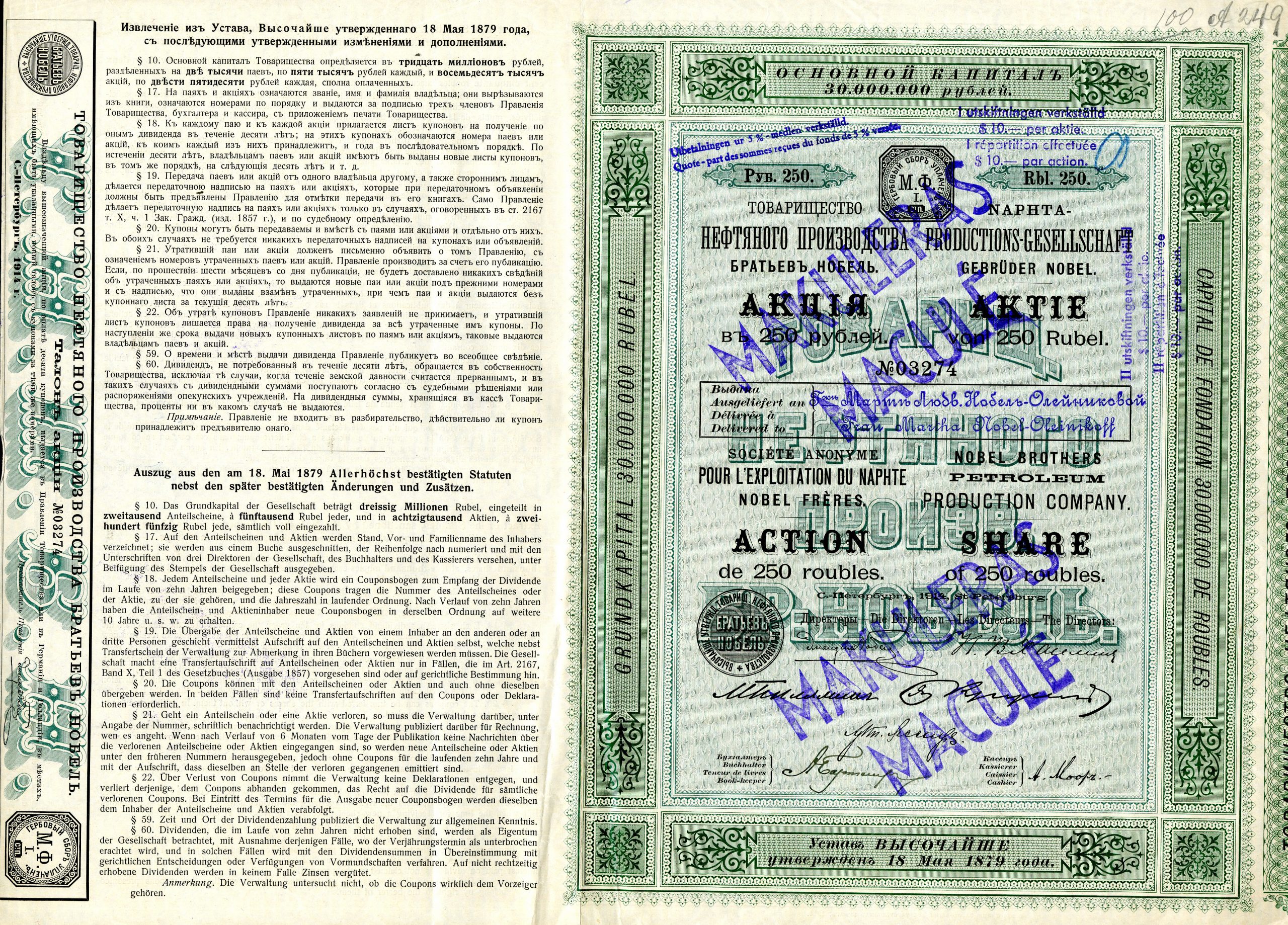 One of the Branobel shares issued in 1914 and canceled a bit after the World War II.