The Nobel family returns to Baku

During the Russian revolution, the entire Nobel family’s huge company conglomerate was confiscated, and all the Westerners fled the country. But in Baku, history lives long in the memory. Following the fall of communism and Azerbaijan’s independence, contact was re-established with the descendants of the Nobel brothers.

The seed was a letter from the leader of Baku’s Evangelical-Lutheran community, Tamara Gumbatova, to the Nobel Family Society in Sweden. The community’s church, Die Kirche, was celebrating its 100-year anniversary in March 1999 and it was hoped that the Nobel family would honour it with its presence. For the Family Society, the letter was a door into a lost world.

The Nobel brothers’ companies in Russia had been nationalised by the Bolsheviks in 1918. Then two-year-old Carl Tydén knew nothing of this. His mother, Andri, was the daughter of Carl Nobel, who had died of diabetes in 1893, and so he was the great-grandchild of the elder Ludvig Nobel. Contact with the family in St. Petersburg had been lively. Carl Tydén’s father, Ebbe, had, we note, owned a Russian dictionary which shows that he had tried to learn Russian at some point, possibly to work as part of the Nobel companies’ management in St. Petersburg.

“Of course, the company in Russia was mentioned during my childhood, but never with huge interest. It was long gone – and a long way away. Over the years, Andri maintained a knowledge of really juicy Russian swear words, but forgot the rest of the language,” Carl remembers with a smile.

Marta Nobel-Oleinikoff, daughter of Ludvig Nobel jr, took the initiative and organised the first family meeting in 1948. The Nobel Family Society was formed in 1975 to keep the tradition alive. However, history took a new turn with the collapse of the Soviet Union. Azerbaijan declared itself independent in 1991; years of conflict and economic crises followed. As with other ex-Soviet republics, Azerbaijan was forced to “rise” from the ashes. With humanitarian assistance from the west and the entry of a number of international oil companies around 1992, the situation improved. The conflict concerning Nagorno Karabakh is still not resolved, but an armistice with Armenia is in force.

The Lutheran church in Baku was built at the end of the 1890s with funds from Nordic community members and assistance from the Nobel family. The church, in the centre of the city, survived Stalin’s demolitions and was used as a concert hall. Following independence, the community was again allowed to work and to use the premises free of charge for a few hours a week. Enthusiasm at a higher level in the secular but traditionally Muslim nation, was muted.

Community leader Tamara Gumbatova had discovered from preserved membership lists that Gösta and Genia Nobel had baptised their daughter Nina at the church in 1917. Mrs. Gumbatova wrote to the Swedish ambassador in Moscow in order to contact Nina, who had unfortunately already died in 1934. However, the letter reached a contemporary Nina – Dahlbeck – who was a member of the Nobel Family Society, and eventually Carl Tydén commenced correspondence with Tamara Gumbatova. In 1998, the family were invited to attend the church’s centenary celebrations held the following year.

“I can’t remember today what really set the ball rolling,” says Carl Tydén, “but my nephew Anders and his Finnish colleague Doctor Pertti Savonen were happy to come along.” Savonen had owned a collection of stamps from Baku since he was a child and was enthusiastic about the opportunity to visit this secretive place. Tydén was probably the person most familiar with the history of the oil company – he was the Nobel Family Society’s archivist.

Carl tried to interest the Swedish Church in Stockholm in the small community in Baku, without significant results. However, the society collected money for the trip, and with suitcases full of second-hand clothes, the three of them arrived in Baku. The re-inauguration of the simply decorated church after 100 years was a solemn occasion. Carl Tydén explained “that it was an honour for them, as the first Nobels in over 80 years, to have the opportunity to visit the church”.

The visit to the Black City district, just north of Baku, was important. It was here that the Nobel brothers had their main plants for converting crude oil into petroleum products. The company came to dominate the Russian oil market, and eventually became an international conglomerate.

Just opposite the factory area lies the remains of the residential area that the elder Ludvig Nobel had built at the start of the 1880s. The managing director’s house was plundered in 1920, when the Bolsheviks seized power. In 1998, the effects of the hammer and sickle were still clearly visible; there were holes in the floor and ceiling. Following the seizure of power, the building had been used as a home for children whose parents had been arrested as enemies of the state. Over time, the decay had started in earnest.

The managing director’s house in the former residential area has been renovated since 2002 with assistance from the Baku Nobel Heritage Fund. A damaged residential building and a building intended for use as a hospital also remain in the area. Originally, there had been twelve houses for families and bachelors, a club house and restaurant, an ice cellar, stables and the managing director’s house, all in a lush park. There is still a huge pit outside the walls where crude oil was stored. The road to Villa Petrolea is now called Nobel Prospekt, previously Workers’ Street. In 1999, this street was the site of a modern petrol station with a blue and yellow frieze around the roof, with the openly accepted name of Nobel…

Gösta Nobel’s pass photo made in Baku year 1916. From Branobel collection at National Archives of Azerbaijan. 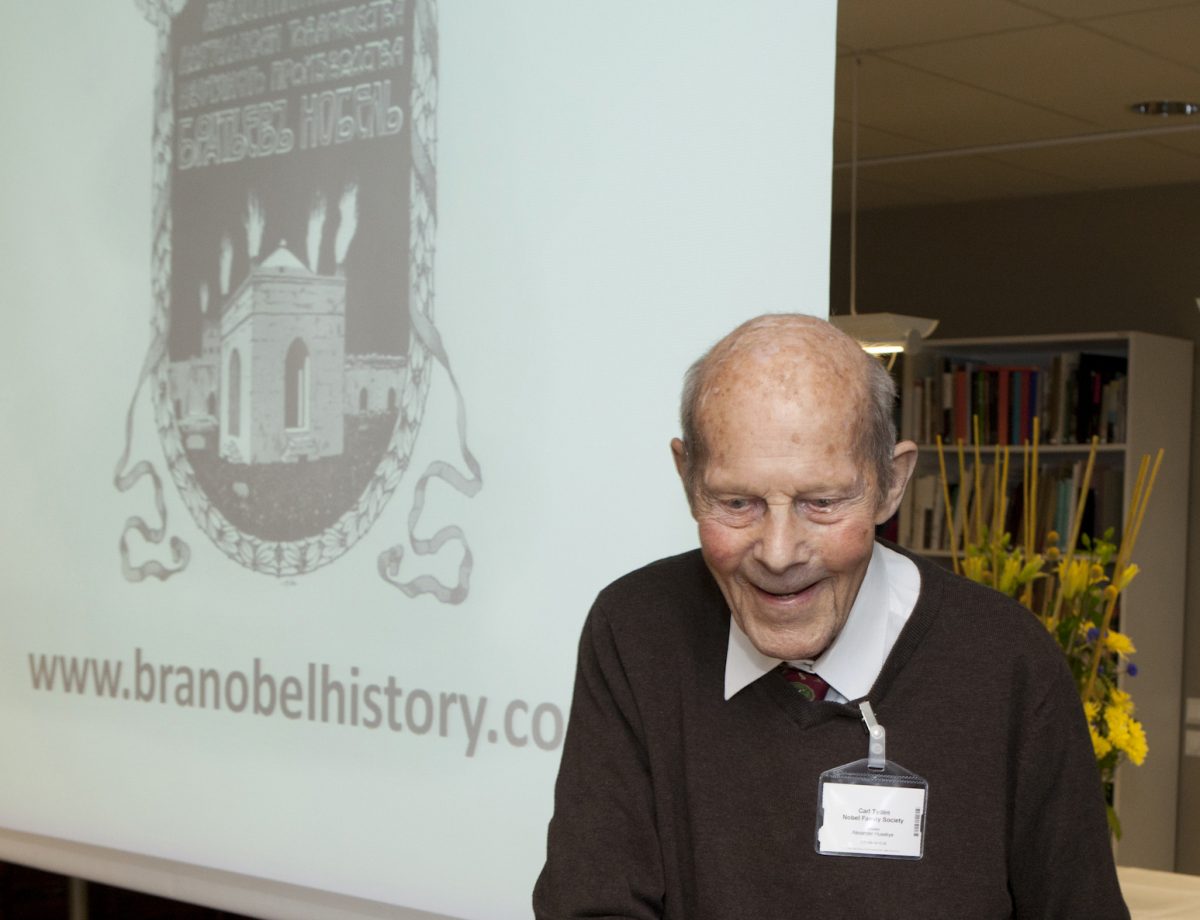 Carl Tydén opens a ceremony of launching of the website www.branobelhistory.com at Centre for Business History in Stockholm. 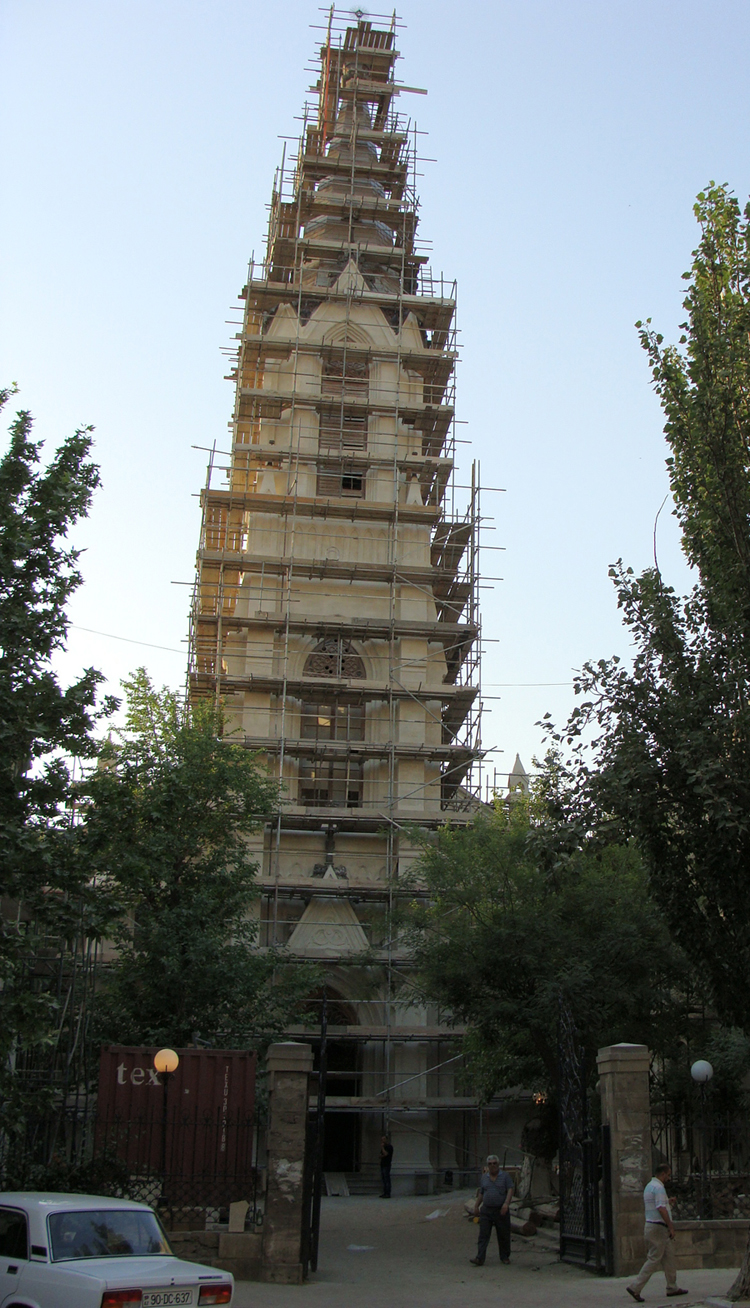 The Lutheran Church in Baku under the renovation, April 2011.