Finding efficient ways of transporting the oil was crucial and the Nobel brothers were constructing ocean-going tankers early on. They were also the first to introduce pipelines, and, concerned with the great waste of oil, they invented the notion of oil storage above the ground.

In order to provide the vast Russian Empire with its oil products and gain access to the world market, the Nobel Brothers manufactured ocean-going tanker ships and railway tank wagons, thus increasing the speed of transportation for oil and oil products. In 1877, the Nobel brothers proceeded to design and build their own oil tanker at the Motala shipyard in Sweden. That was the first steam oil tanker in the world and it was given the name Zoroastr [faktaruta 1]. In 1879, Branobel ordered the biggest transatlantic steam tanker, the Moses. In this way, Branobel gained a monopoly on both sea and land transportation in Russia.

The Nobels were also the first to construct an oil pipeline [faktaruta 2]. The 10 km-long oil pipeline connecting the Balakhany [faktaruta 3] oil fields with the company’s oil refinery in the Black City was able to pump 80 puds [faktaruta 4] of oil per day. This, coupled with other innovations, enabled the Nobels to produce high-quality paraffin and to gain a monopoly on the Russian paraffin [faktaruta 5] market. In 1883, Branobel built a chemical plant in the Black City. This plant mainly produced dipping acid [faktaruta 6].

The Nobel brothers invited experienced specialists from foreign countries to work for them and made innovations in drilling. At the beginning of the 1880s, the most modern types of drilling and oil-producing equipment could be found at the Balakhany-Sabunchu oil field.

The Nobel brothers were also exploring fields for oil and were studying approximate oil reserves. For this purpose, they invited the famous geologist Hjalmar Sjögren [faktaruta 7] from Stockholm. As a result of Sjögren’s geological studies, Branobel drilled a number of productive oil wells at numerous oil fields. In general, Branobel drilled 433 oil wells and produced 900 million puds [faktaruta 8] oil from these wells.

Branobel was also the first to implement the rotary drilling method [faktaruta 9] used in the Texas oil fields of USA. The oil well drilled at Surakhany [faktaruta 10] using this method was very successful. Gradually, the number of wells drilled using the rotary method increased.

Due to a lack of oil reservoirs, Baku oil-field owners could not store a large amount of oil near their wells. There were only wooden tanks and pits in the ground at some distance. When a well gushed, these storage places filled in no time. This method was very costly, as great quantities of oil evaporated or simply seeped back into the ground. To counteract such wastage, Ludvig Nobel started to design and build aboveground reservoirs for oil storage, which was a courageous step forward for the oil industry.

He replaced bricks and stones with more durable materials, for example iron. These reservoirs were cylindrical in form in order to facilitate the quick and accurate calculation of the oil products they contained. Oil-field owners received the design favourably and they started using the reservoirs at their fields, considerably reducing the amount of wasted oil [faktaruta 11]. This in turn ensured the continuous operation of oil refineries and eliminated the frequent fires at oil fields.

While acquainting himself with Baku, Ludvig Nobel noticed that oil from the fields was transported long distances mostly by two-wheeled horse-drawn carts along uneven roads, or, at best, in 20-pud [faktaruta 12] wooden barrels. The cost of such transportation was higher than the price of crude oil. Most of the time bad weather conditions prevented the transportation of oil and this resulted in interruptions to the oil refinery’s operation and delays in orders. Ludvig Nobel could not accept the situation and decided to use oil pipelines to pump the oil from the oil fields to the refineries.

The other oil field owners were reluctant, thinking that he was using some trick to try to seize all the oil from their fields. Therefore, Ludvig Nobel was alone with his progressive idea. However, he managed to raise some funds and, with some difficulty, obtained permission to lay the pipeline through certain areas, purchased steel pipes from America and invited skilled pipeline specialists. The laying of the oil pipeline from Baku to the Black City eliminated the need for the horse-drawn carts to transport oil, causing thousands of cart drivers to lose their jobs. They damaged and broke the pipeline in several places. In order to prevent this and any possible future sabotage, Ludvig Nobel arranged for the pipeline to be protected by Cossack horse patrols.

The project was completed in 1878 and the pipeline was able to transport 35,000 puds [faktaruta 13] of oil per day. The cost of the pipeline was 100,000 roubles and it paid for itself in a single year. This method was seven times cheaper than the traditional method of oil transportation.

Installation of the Baku – Batumi oil pipeline [faktaruta 14] was completed in 1907 and the South Caucasian railway line played an important role in the development of the Baku oil industry. The conditions for the transportation of Baku oil to the Black Sea became favourable and it was easier to supply foreign markets with a large amount of oil and oil products. All these measures considerably reduced the price of paraffin and in a few years a pud sank by 90 percent. 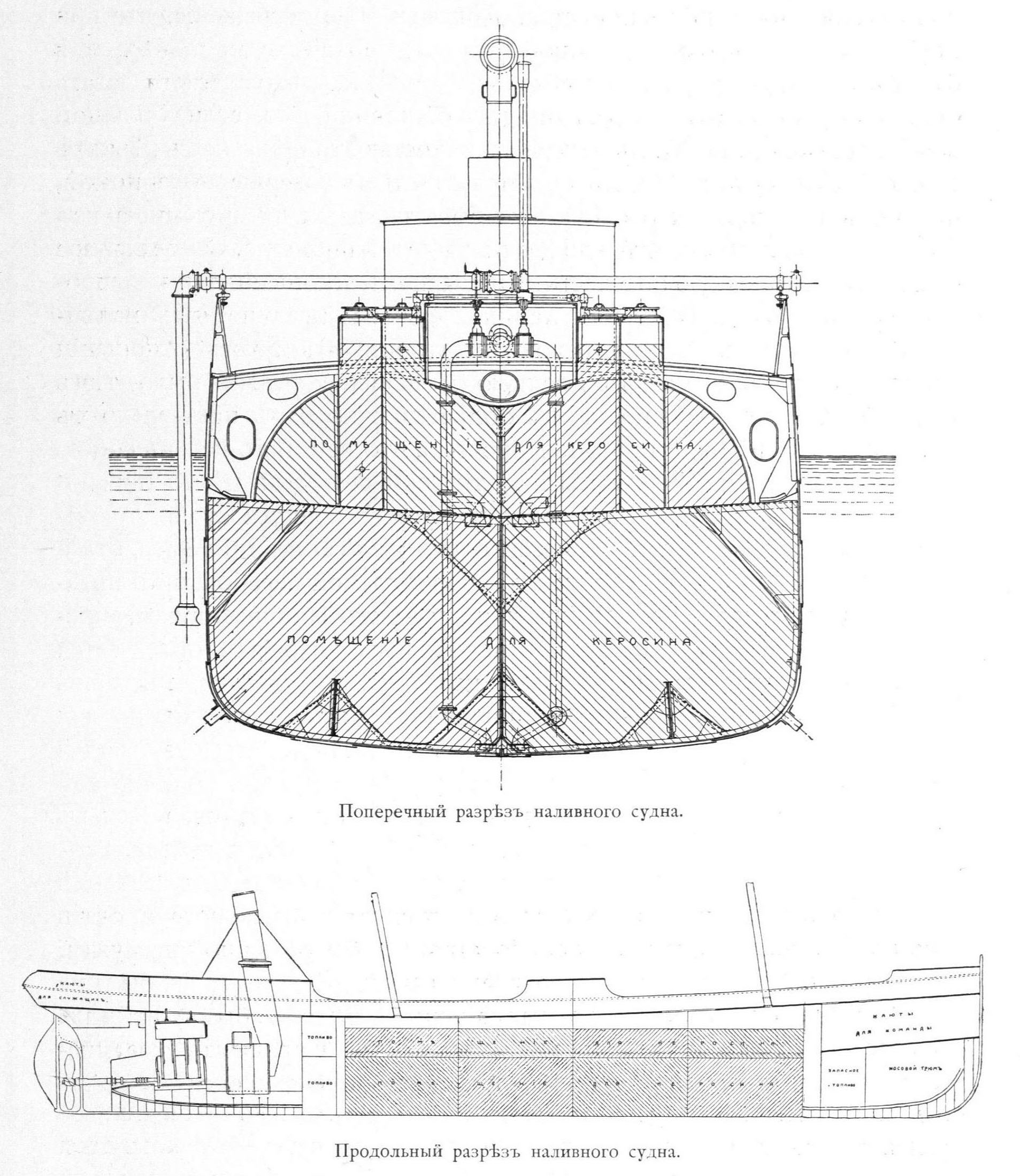 Tanker ships designed and built after Branobels instructions created a basis for the Russian tanker fleet. Here we can see the average drawings of one of the first successful boat models. 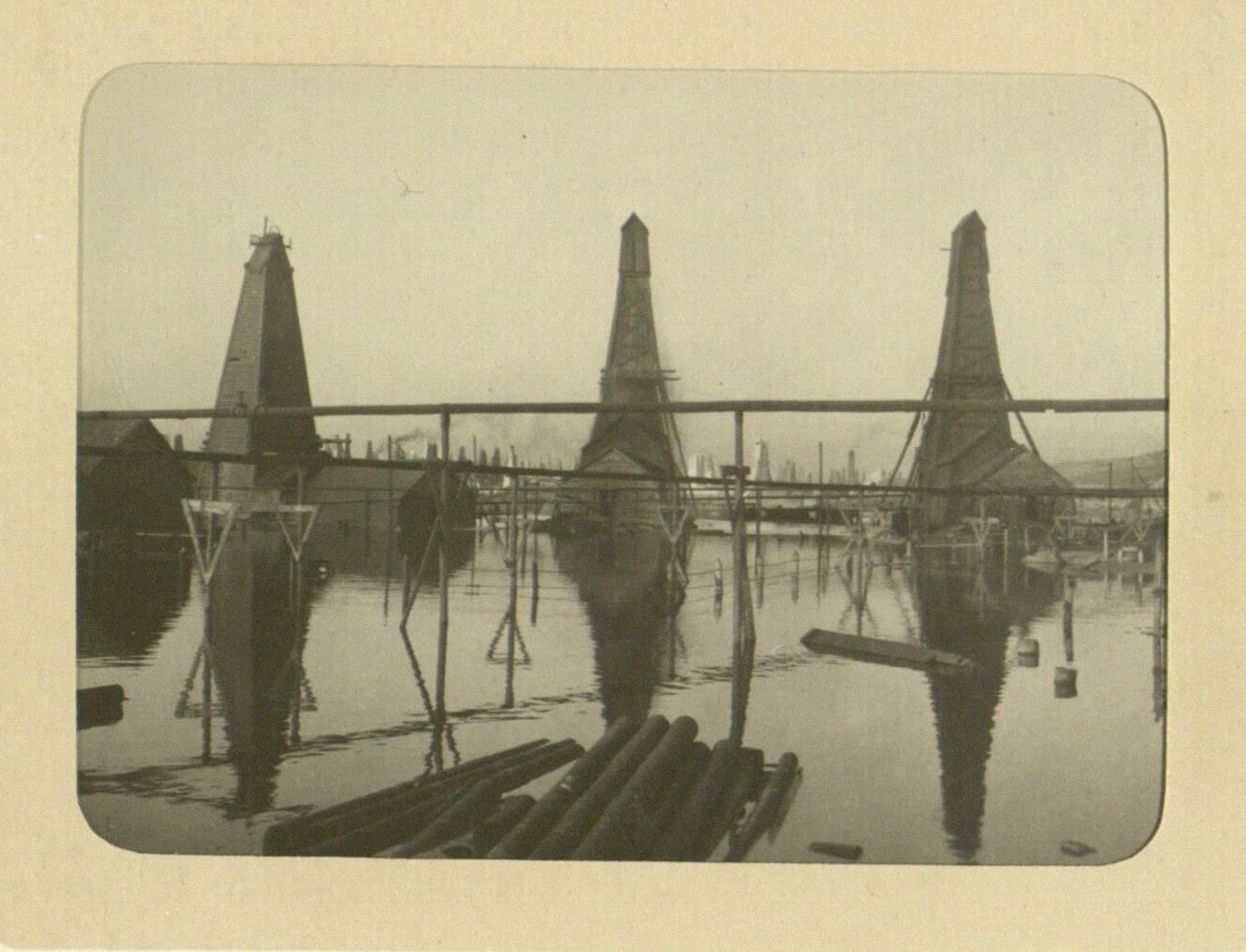 As in a mirror of the black oil you can see the great boom of the Russian industrial build-up, here in form of three silent oil derricks.