Branobel was founded in 1879 and grew quickly due to the Nobel brothers’ willingness to develop all parts of the oil business like production, transportation and sale. At the end of the 19th century Branobel was among the eight biggest oil companies in the world.

At the start of the 1880s, Branobel became the leading oil company on the Russian market. Most of the capital was spent on arranging the transportation and sale of oil. In the 1880s, the oil reservoirs, ships, oil storage tanks and oil pipelines of the Branobel Company constituted 75 per cent of the total property. The company was developing into a diversified production – transportation – sales-industrial complex. For example some 1,500 special tank cars owned by the Nobels plied the Gryazu – Tsaritsin railway line. The Nobels achieved a dominant position in the transportation of oil products via bridges over the Volga and via roads leading to their domestic Russian markets.

In 1882, Branobel made its first attempt to become the leader in terms of paraffin oil sales in Russia and proposed setting up a paraffin syndicate. In the same year, the company established a concern to sell Baku paraffin in Western Europe. In 1898, when Baku oil production surpassed that of the USA, Branobel was one of the eight largest oil companies in the world, producing more than 327,000 tons of oil.

In the midst of fierce competition for control of concentrated oil production in 1884, the oil barons in Baku established their own organization – the Oil Extractors Congress Council. The council was basically established to represent the interests of all manufacturers, irrespective of their wealth. Gradually, several big companies took a leading position in the Council and Branobel was one of them. Until 1888, Ludvig Nobel led the Council between sessions.

Ludvig Nobel was appointed as the general manager of Branobel. The great fame of the company and the corresponding position this brought, in terms of the world’s owners of capital, was Ludvig Nobel’s due. When Ludvig Nobel died on 31 March 1888, his son Emanuel succeeded him. In 1889, the Russian Technical Society held a meeting in honour of Ludvig Nobel and established a “Nobel Brothers’ Company” gold medal and the Ludvig Nobel scholarship, worth 6,000 roubles.

In 1893, the Union of Baku Paraffin Producers was established by representatives of the various oil companies, approved by the Ministry of Finance. This first group for the export of Baku oil functioned until 1897 and was competing for its share of world markets.

In 1893, Branobel signed a contract with Siemens Brothers & Co. In accordance with the contract, all the ores extracted from the Gadabey mine would be sold to the Nobel Brothers company. Copper pyrites, also called yellow ore, were transported and processed at the Nobel Brothers’ chemical plant in the Black City. This contract marked the start of the important mining sector being subordinated to the oil monopolies, which dated from this last quarter of the 19th century. 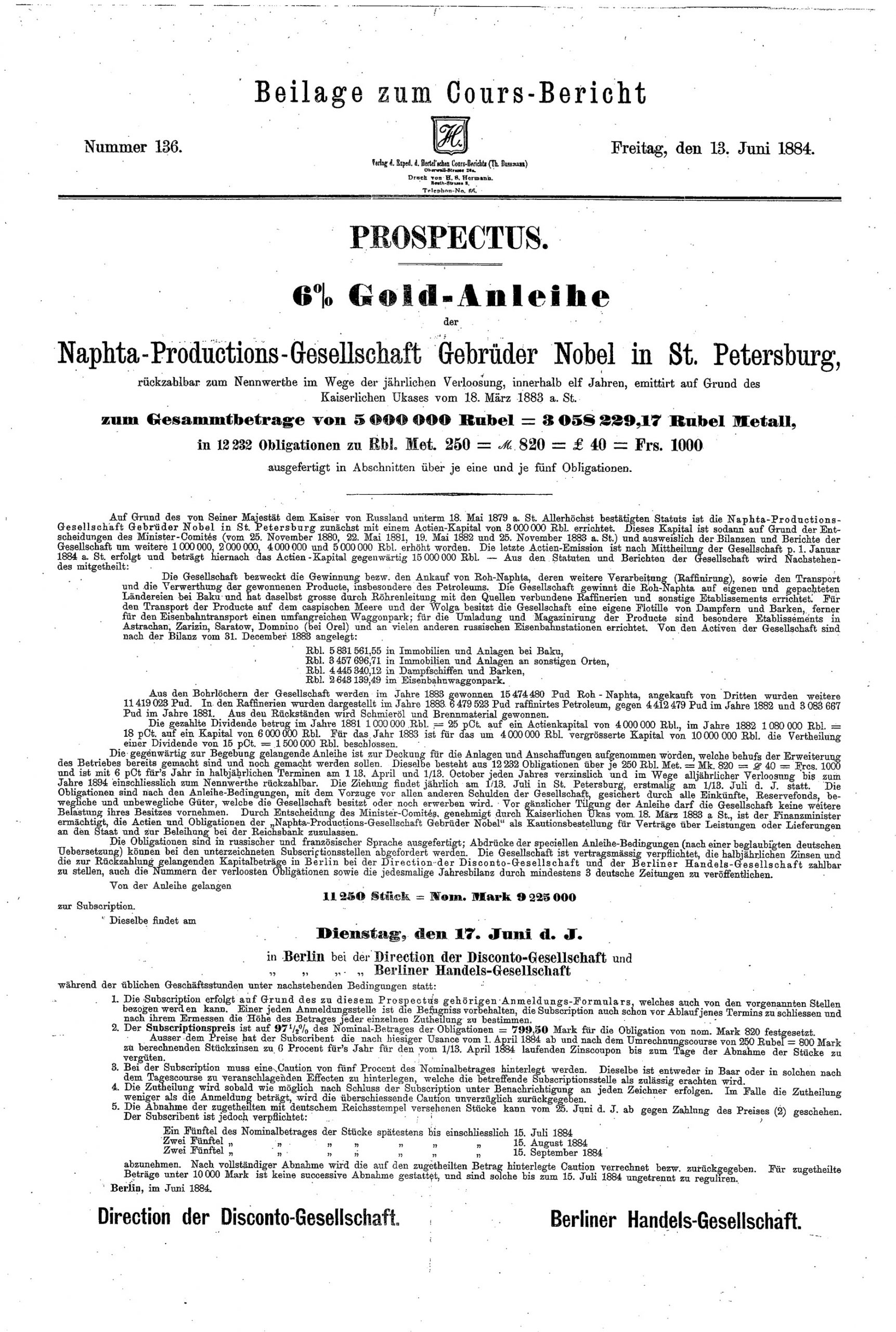 The issue letter from 1884. Branobel went public in Berlin 1884 to raise new capital for expansion of the company.