The pivotal role of Azerbaijan oil and Baku

Start » The pivotal role of Azerbaijan oil and Baku

As early as the 15th century, Baku was an important international trading centre for merchants travelling between the East and Europe. Caravans of camels and merchant ships transported oil, salt, madder and saffron. In the 19th century, the rapid growth of the oil industry caused a total modernization. By the turn of the 20th century, Baku was one of the biggest industrial cities of the world.

The oil wells drilled in 1846 at Bibiheybat in the Baku region were the first mechanically-drilled oil wells in the world and represented an important technical innovation. It is worth pointing out that the USA, the world’s first oil producer, started using this mechanical-drilling method 13 years after Baku. In 1860, the volume of oil produced in Baku was 247,814 puds, in 1862 this figure reached 337,926 puds (approximately 5,500 tons) and it continued to increase. In 1870, Baku oil fields were producing 1,482,100 puds (24,000 tons) a year.

In 1858, the Transcaspian Company, owned by the Russian capitalists Kokorev and Gubonin, built the first oil refinery at Surakhany in the Baku region. In 1861, N.I. Vitte, a Tbilisi pharmacist, built a paraffin factory on Pirallahi island and, in 1863, Javadaga Malikov built an oil-distillation plant in Baku to produce paraffin. By 1867, there were 15 oil refineries in the Baku region and in 1873 it had increased to 50.

This increase in oil production was accompanied by the utilization of new drilling techniques. In the 1870s, the oil industry entered a phase of technological innovation and the expansion of production processes. Originally oil was extracted from hand-dug wells using buckets. Bailers substituted these and from 1871 the Baku oil wells were drilled using the borehole method. The introduction of steam engines in 1873 also played an important role in the development of Azerbaijan’s oil industry.

The tremendous upsurge in the oil industry demanded considerable investment. This attracted foreign entrepreneurs that were capable of investing in fields and factories, and especially in storage and the transportation of oil. The imperial government, which favoured foreign entrepreneurs, adopted a resolution on 1 May 1880 admitting foreigners to oil fields within the Baku region. The biggest representative of foreign investment in the Baku oil industry in the second half of the 1870s was the Nobel brothers’ company, Branobel, with 3 million roubles of share capital.

The Swedish capitalist Ludvig Nobel and the St. Petersburg baron and manufacturer P.A. Bilderling, who was also Nobel’s partner in the Izjevsk armaments factory, founded Branobel. In the mid-1880s, the French banking house of the Rothschild’s established another large enterprise in Russia – the “Caspian – Black Sea Industry and Commerce Society”. In the 1890s, British capital, represented by the honorary citizen of St. Petersburg, James Vishau, made inroads into Azerbaijan’s oil industry. In this fashion, most local concerns came under the control of foreign capital, which resulted in the expansion of foreign capital in the oil industry. The second half of the 19th century can therefore be regarded as a new stage in the history of Baku.

The rapid development of capitalism, the increase in demand for oil, the intensive development of oil fields and the construction of new factories and plants, turned Baku into one of the biggest industrial cities in the world. Within a short time, a number of Swedish, British, Belgian, German, Dutch and US companies opened their representative offices in Baku. The Baku industrial region with several “oil villages” emerged. By the turn of the 20th century, Baku was producing 50 per cent of the world’s oil.

Besides the oil industry, other branches of the economy were flourishing. The world’s first oil tanker, oil pipelines, railways, telephone stations, horse-drawn cars and trams were all to be found in Baku. As a result of this economic growth at the end of the 19th century, Baku became the biggest and most important city of the Russian Empire in the Caucasus. 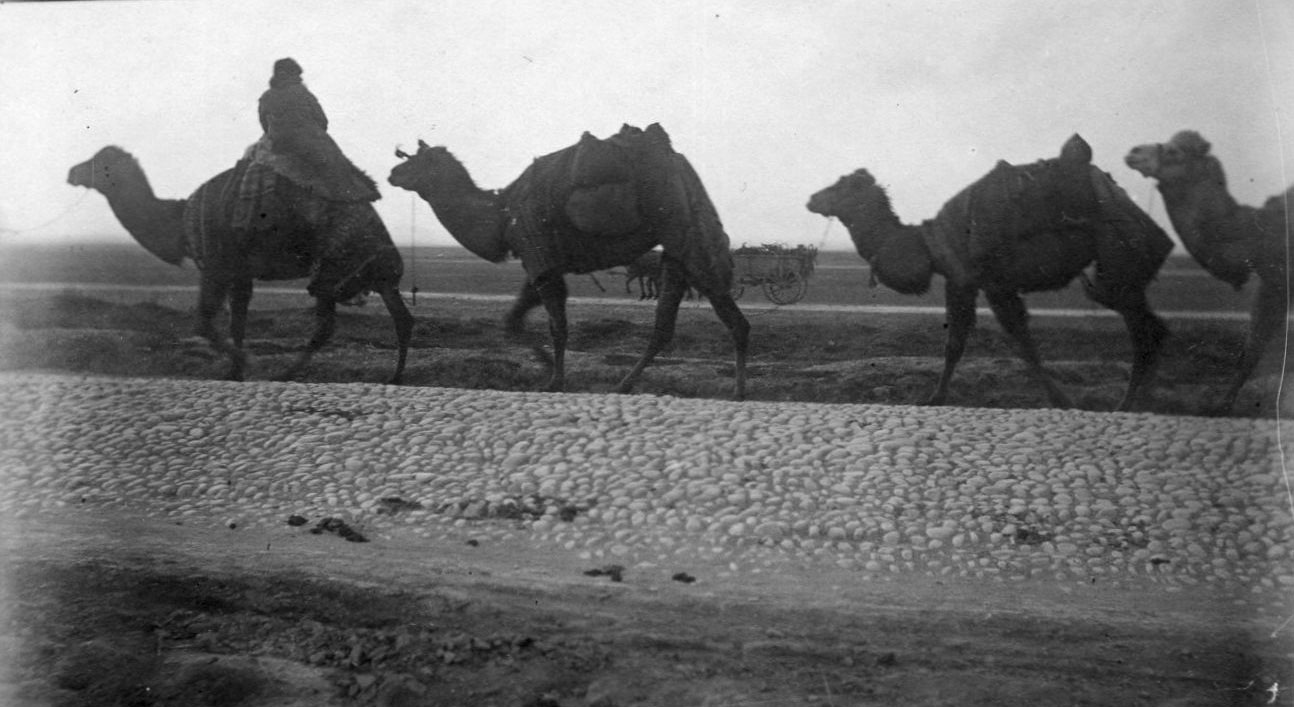 Even before the oil fever Baku was an important trading centre for merchants travelling with their caravans of camels transporting oil, salt, madder and saffron. 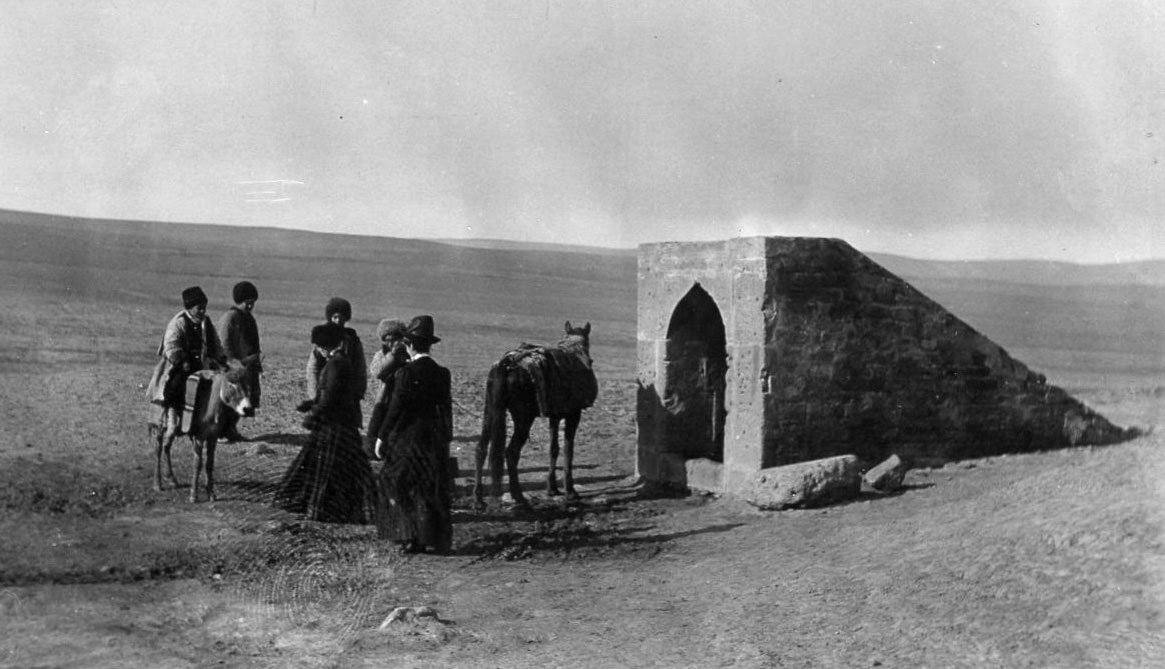 The water well in the middle of the desert landscape outside Baku symbolize the days when Absheron still was relatively sparsely populated with a long distances between villages and without fixed routes. 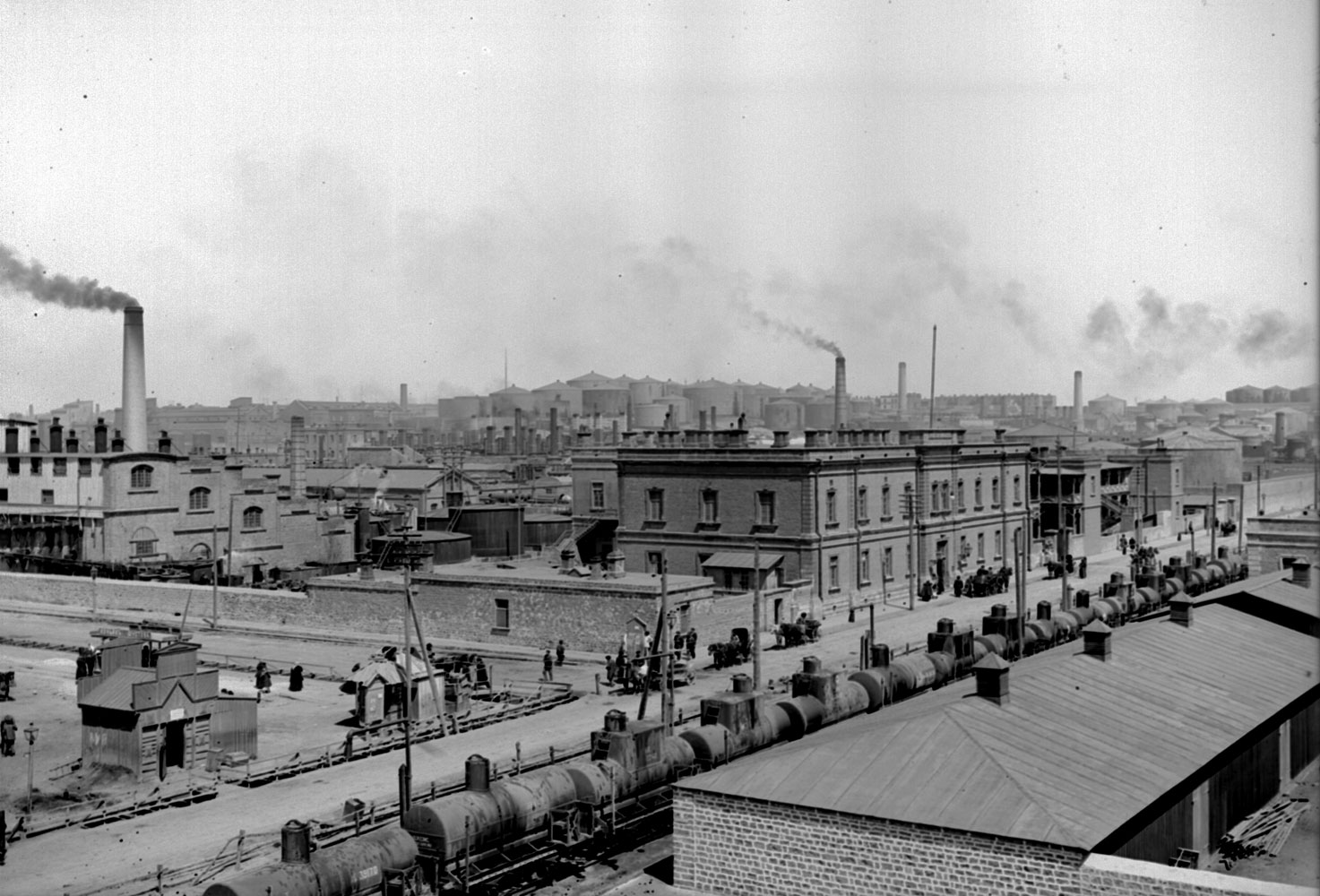 It took less than half a century for a large and modern industrial city to grow up. Railroad tracks and telegraph wires cut through the town and factory smoke lay heavily over it. 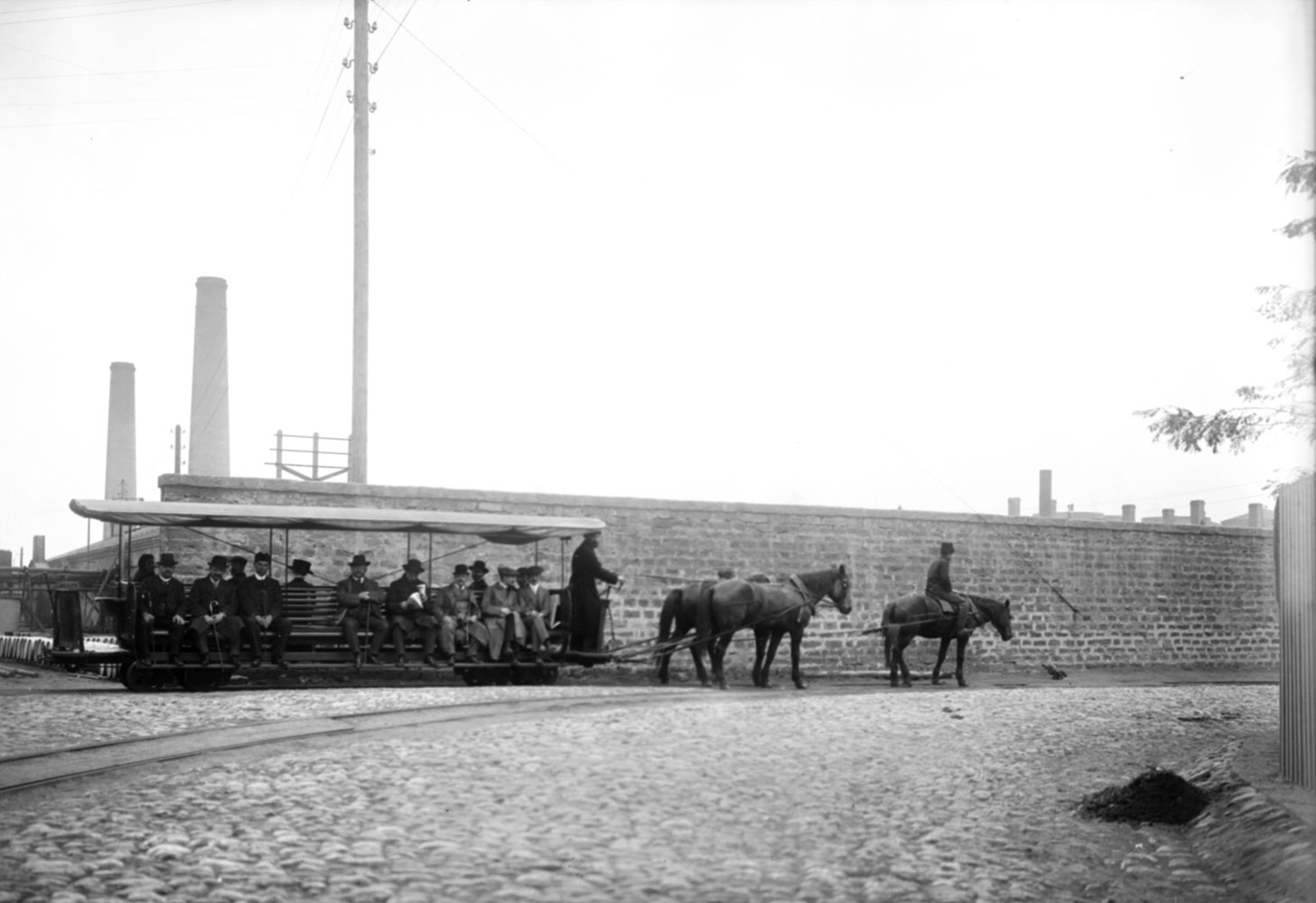 The intensive growth of the city, development of oil fields, construction of new plants demanded a quick solution to the transport problems. Some claim that horse-drawn cars and trams were all to be found in Baku. 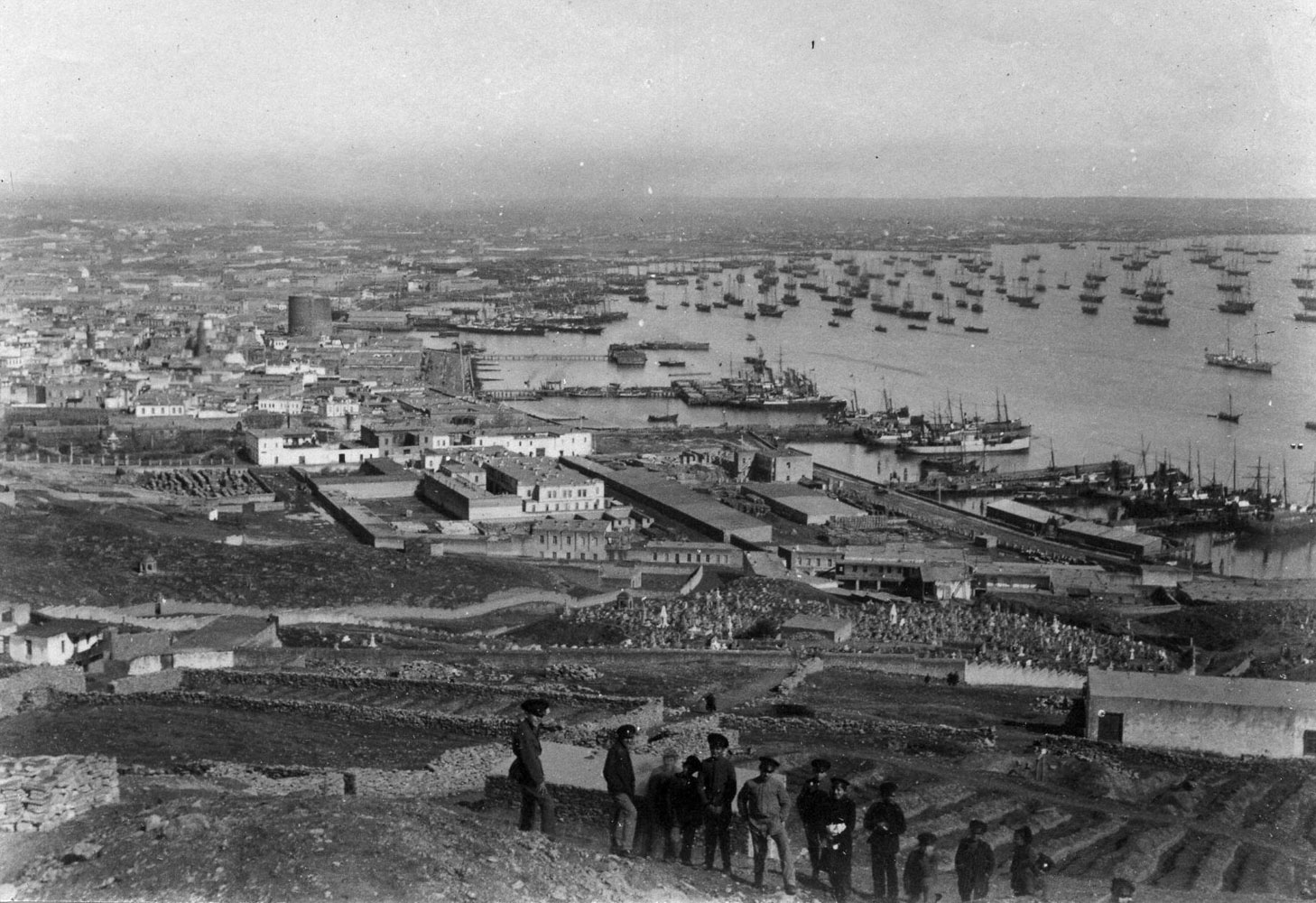 A general view over Baku. New liberal legislation encouraged the inflow of foreign capital, which resulted in the dramatic expansion of the oil industry. By the turn of the 20th century, Baku was producing 50 per cent of the world’s oil.