Branobel showcased the company and its activities at Russian industrial exhibitions. In 1896, the last one was held in Nizhny Novgorod. The company’s pavilion was specially designed in a “Mauritanian” style, containing, among other things, a huge panorama over Baku’s oil field.

The sixteenth All-Russian Industrial and Art Exhibition took place in Nizhny Novgorod in 1896. It was the largest and also the last of its type in Tsarist Russia. The exhibition complex, with its 19 separate divisions, was located on the western bank of the River Oka. The main pavilion consisted of the central building from the Moscow exhibition of 1882. This had been dismantled piece by piece and transferred to Nizhny Novgorod by boat. Section IX, Factory, workshop and handicraft production, represented by Branobel, the Russian-American Paraffin Production Company, the Surakhamy factory, K. Schmidt’s chemical-technological laboratory, Shibaev & Co, and others.

Branobel’s products were shown in a pavilion specially designed by architect R.F. Meltzer in a “Mauritanian” style, with a minaret tower. The building was regarded as one of the most beautiful at the exhibition. Inside, the public could view panoramic images of the factory and oil tower buildings in Baku

Among the display objects were samples of various crude oil varieties, diverse oil products (petrol, gasoline, paraffin and lubricating oils), a fragment of a steel bore hole drill, a crumpled feed pipe made from a piece of thick boiler plate, an oil tower with a cable-driven drilling drum, a model of the steamer s/s Ludvig Nobel, and a wooden model of an oil-powered forge furnace on a 1:1 scale.

Among the more unusual objects were some large stones weighing between 15 and 30 kg, which had been tossed into the air by oil gushing from a bore hole, as well as a collection of the various rock types discerned by the work teams had come across during their drilling work. However, the exhibition critics noted that Branobel had failed to provide their objects with explanatory texts.

Visitors to the exhibition noticed the décor of the Branobel pavilion. Many stopped by an oil painting that depicted a starry night in Surakhany with the ruins of a fire-worshippers’ temple in the foreground and oil towers in the background. Nevertheless, it was the huge panorama over the Black City that captured the imagination and aroused the most admiration.

One of the visitors, V.N. Ogloblin, who was a scientist and specialist in Caucasus oil, described it in the following way: “Visitors were met here by a striking picture; once they had gone up a dark staircase, and stepped onto a high pedestal, they found themselves in the middle of a panorama of paraffin factories, oil pipelines and camel trains loaded with leather bags containing oil.” Some visitors jokingly noted that in order to achieve the complete illusion of reality, the temperature in the room should have been raised to that of a hot day in Baku, and the air should have been saturated with soot and the smell of oil and paraffin, as it usually is in the Black City.

During the four months that the exhibition was open, it received around one million visitors. Among the guests were Tsar Nicholas and his wife, Russian ministers, scientists, ambassadors and cultural celebrities. Experts gave the Branobel company the highest rating and emphasised its huge importance and leading role in the development of the oil industry in the Transcaucasian region during the final years of the nineteenth century. 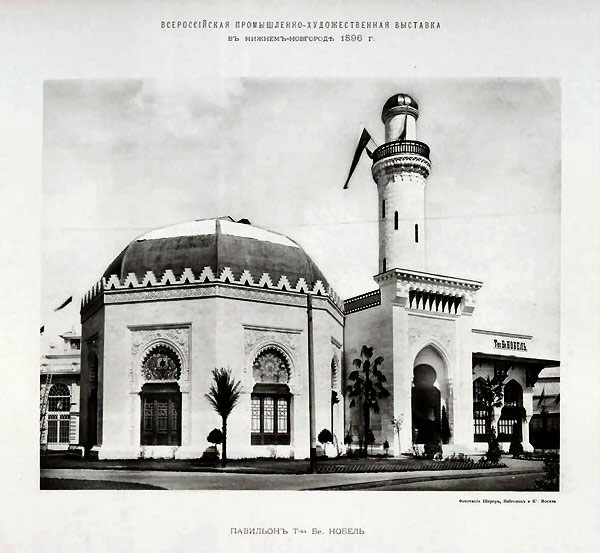 The Branobel Company’s pavilion at the All-Russia Exhibition of Industry and Arts in Nizhniy Novgorod 1896. 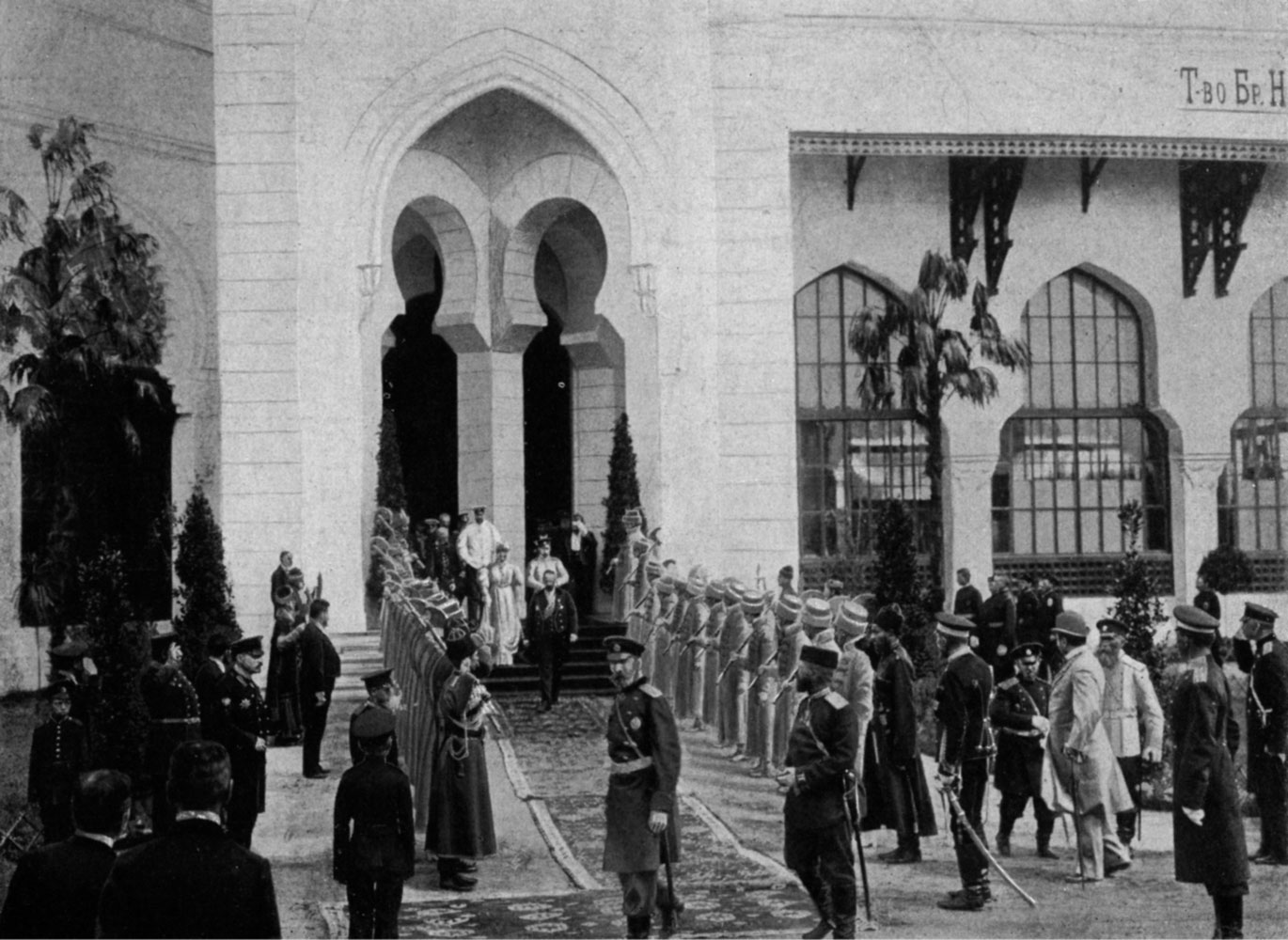 Russian Tsar Nicholas II (in a white tunic) visiting the Branobel company’s pavilion at the All-Russia Exhibition of Industry and Arts in Nizhniy Novgorod in 1896. The pavilion is built according to architect R.F. Meltzer’s project. 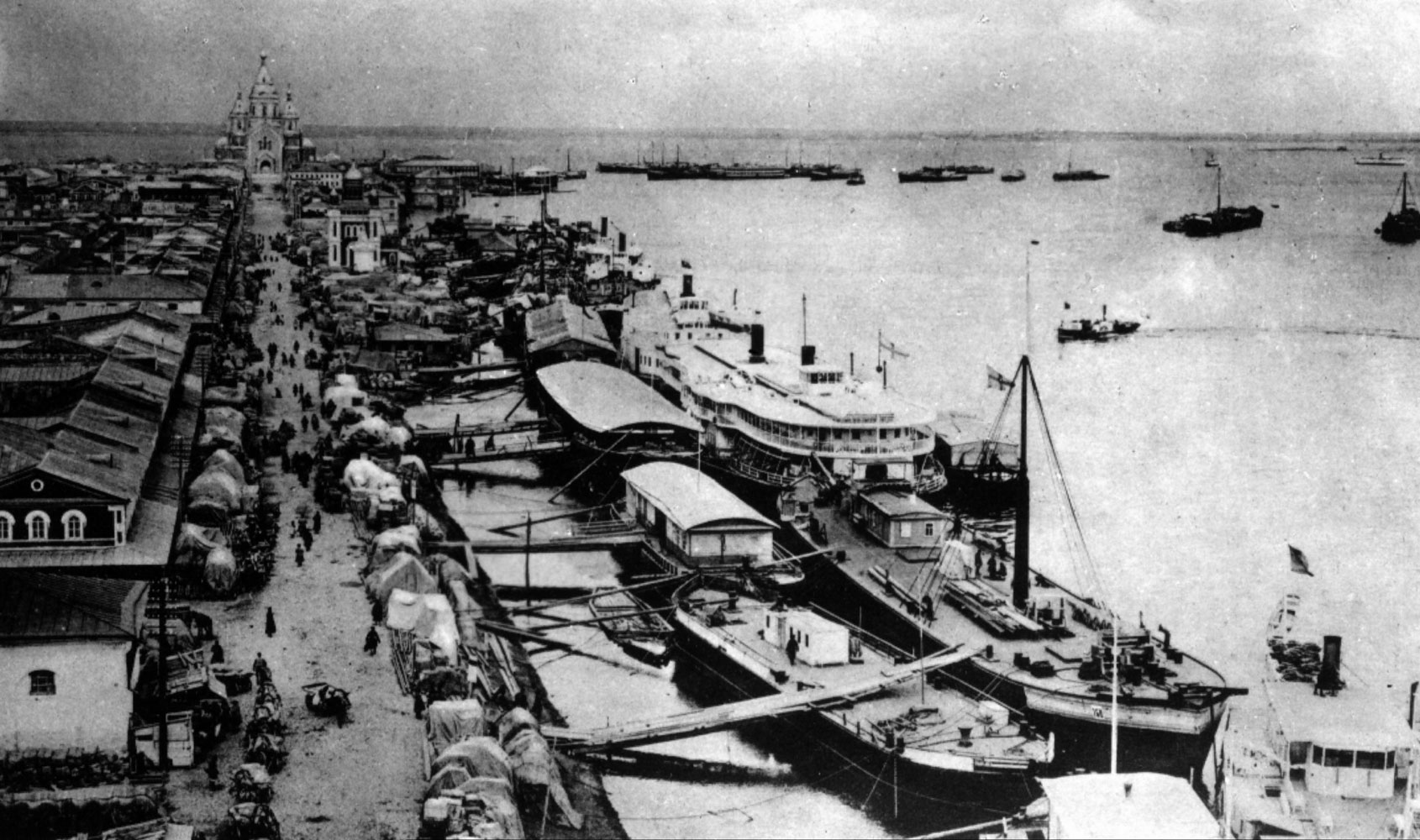 View of the Volga and the cargo wharf at Nizhniy Novgorod in 1896. 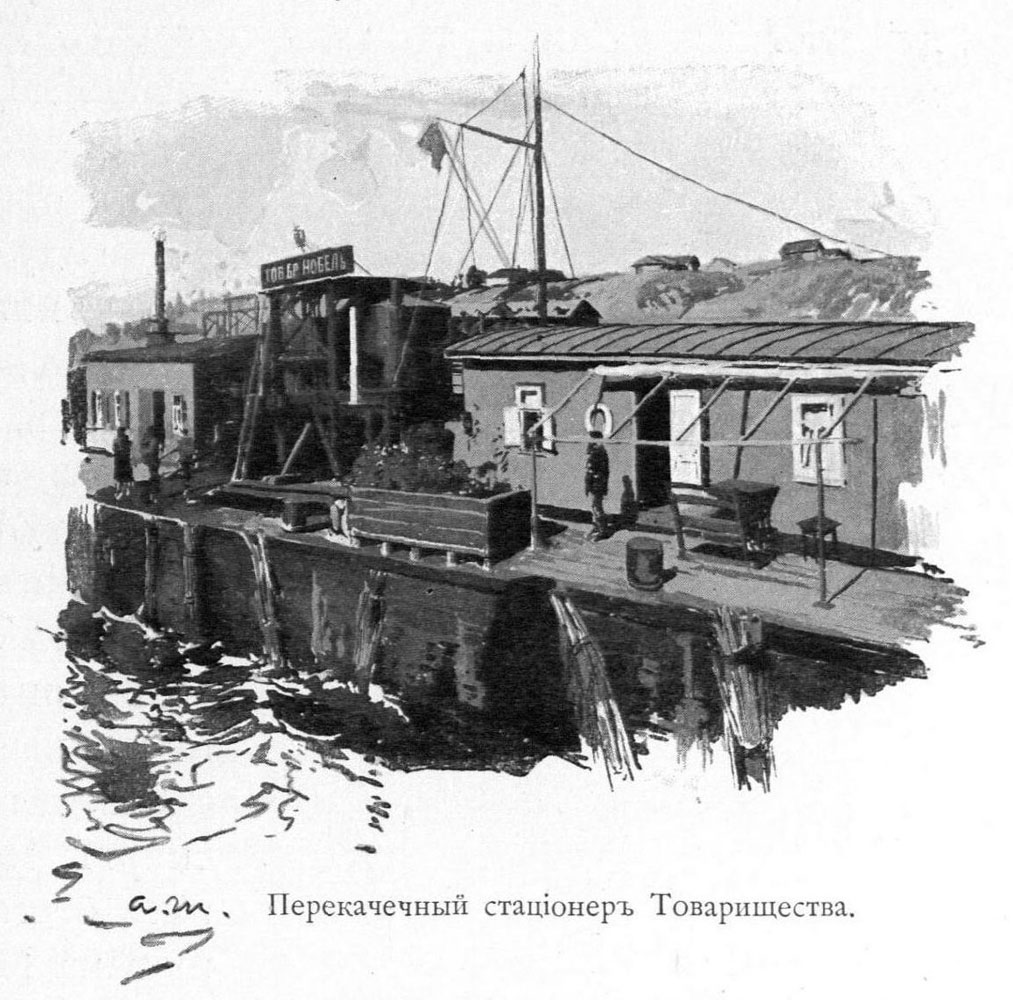 One of the many Branobel pumping stations by the river side for discharging of the river-oilers. Beginning of the 20th century. 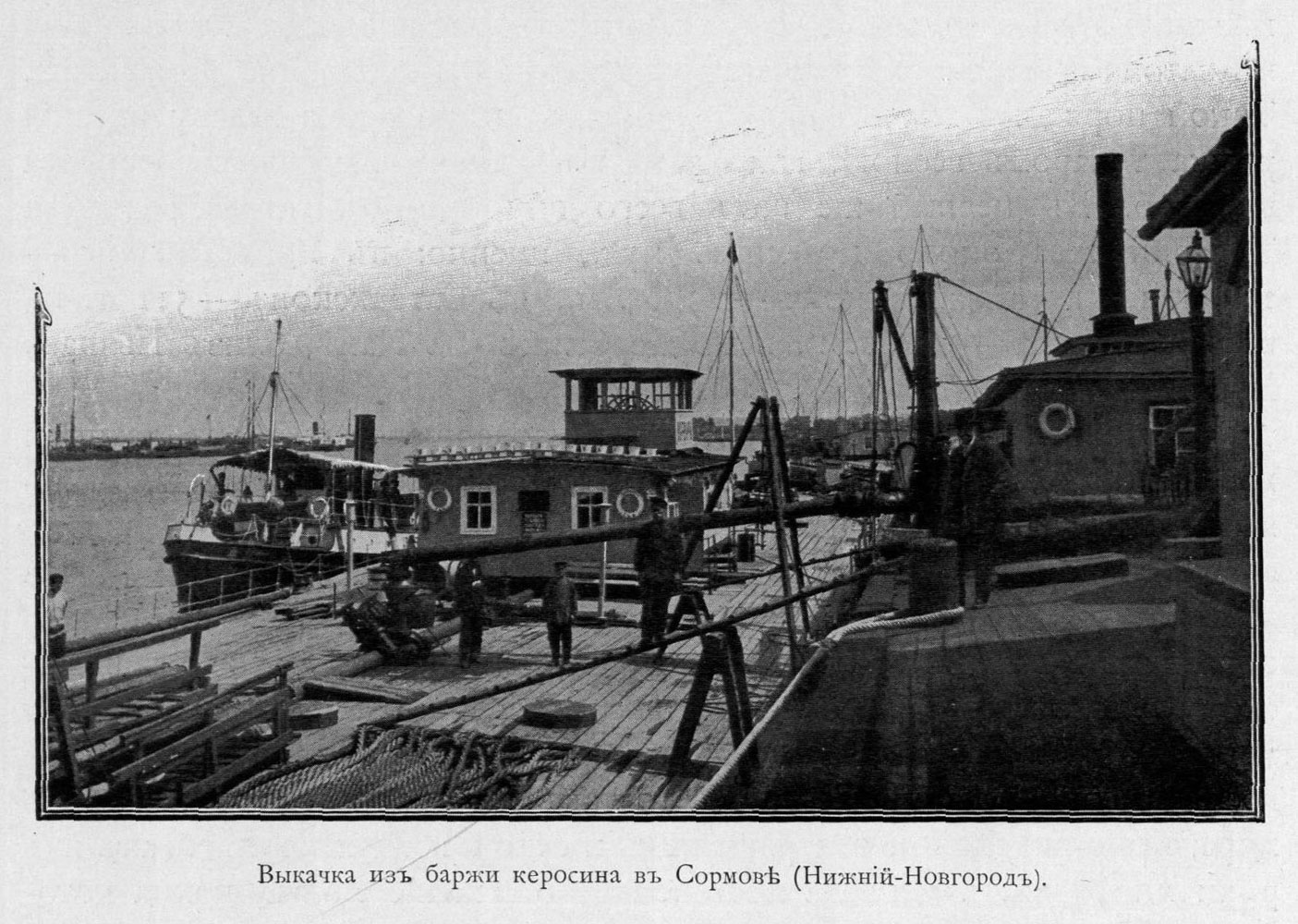 Pumping of paraffin from the river barge near Nizhniy Novgorod in the beginning of 20th century. 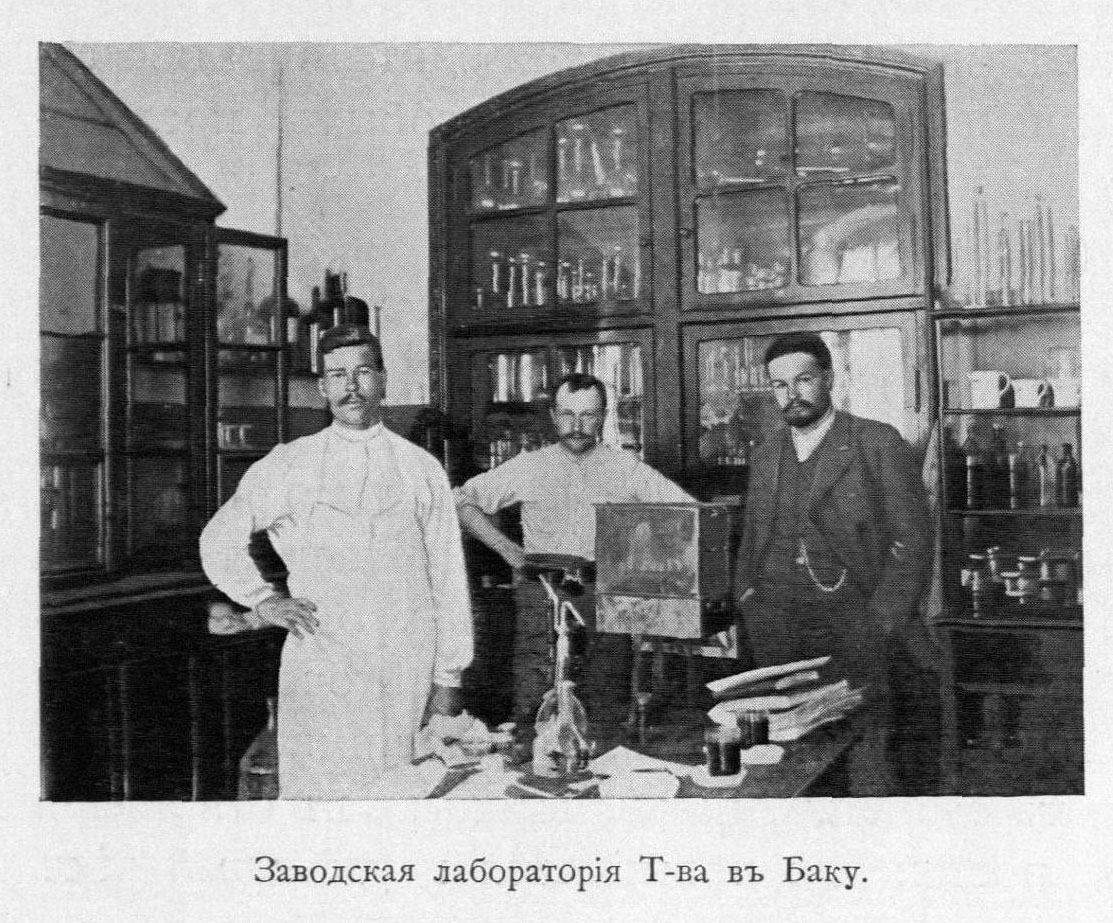 M/s “Velikoross” on Volga. One of Branobel’s river diesel-powered tugboats