Finnish know-how in engineering made a substantial contribution to pumping Kazakhstan oil in early 20th century and building the first oil pipelines from the Dossor field in western Kazakhstan to the north shore of the Caspian Sea. That made camel caravans obsolete.

Nursiltan Nazarbayev, the President of far-away Kazakhstan, visited Finland in 2009.

Far-away? Both countries, Finland and Kazakhstan, which are now both independent, were part of the Russian Empire 100 years ago, under the rule of Nicholas II. Today, few even know that Finns had a central role in the early phases of the Kazakh oil industry.

The Kazakhs say that their industrial oil production began in 1911 on the steppes of Dossor. The operations were launched by the Ural Caspian Oil Corporation, a subsidiary of Royal Dutch Shell. Uralka, as the company was called, according to its telegraphic address, set up a claim of 41 hectares in the Dossor area soon after 1910.

Most of the company’s engineers and local managers were Finns, and they were a strong influence in the development of Dossor into a centre of the petroleum industry within a few years. By 1916 the area produced a third of all of the oil production in Russia.

A Finn, Severin Tigerstedt, was the first local manager of the company. Tigerstedt had previously been a military officer. He had been injured while fighting on behalf of Russia in the Balkans. A Russian fellow officer helped him to get the post. Tigerstedt, who was 60 years old, was given permission to hire one technician, who was also a Finn. He had had enough of the toil within one year, and returned to Finland to be with his family.

Most of the engineers hired by the company were Finns, but the personnel were international in every way: a Swiss geologist was hired, and the bookkeeper was Greek. The workers were Russian and Kazakh, who at that time were mistakenly referred to as Kirghiz.

While searching for an oil deposit in April 1911, Uralka had drilled to a depth of 248 meters. Only salt water came out of the hole, which had a diameter of eight inches. When the drilling tube was raised higher, an oil gusher reached a height of 25 meters. The well put out oil at a rate of 16,000 tonnes a day.

At first, the oil was transported in barrels in a camel caravan. On their return trip, the camels carried water.

In St. Petersburg, the head offices of Uralka were run by the Swedish-born Gustaf Eklundh, who was married to a Swedish-speaking Finn – Vivi Winter – and set up a home in Nuuksio in Espoo. Eklundh’s son Lars graduated as an engineer in 1908 at the Helsinki Polytechnical Institute, and eagerly signed up as the oil drilling engineer of Uralka.

Finland was suffering from am period of Russian oppression in the early 20th century, and industrial jobs were hard to get. Consequently, Lars Eklundh’s fellow course members John Halleen and Yrjö Nenonen went to Central Asia. The Uralka Machine Shop was directed by Ragnar Nyblin, who had graduated as an engineer earlier. Architect Frans Nyberg was working as the responsible master builder. He planned the development of the community, buildings, a road network, a tennis court – and a sauna. Later, back in Finland he became known as a graphic artist.

When news about the success of Uralka spread around the world, the Swedish Nobel brothers’ oil company Branobel, as well as a few other companies, set themselves up in Dossor. The company Emba Kapiskoje, owned jointly by Uralka, Branobel and the Russians, built two oil refineries on the shore of the Caspian Sea in 1912. At that time the first oil pipelines of the area were built from Dossor to the refineries.

Halleen was given the task of building the oil pipelines from the oil refinery to the sea.

The pipes were fitted together on the ice of the Caspian Sea and the pipeline was lowered to the bottom through the ice. Tankers were filled up in the open sea. At one point, Uralka employed 1,200 people. Before the 1917 Russian Revolution, about 20 per cent of Russia’s oil production was in the hands of Shell, the owner of Uralka. The oil fields managed to operate for about ten years before they were nationalised.

Between 1910 and 1920, there was a Nordic settlement in Dossor with its own schools, hospitals, and clubs. At the end of the First World War the Scandinavians started a mass migration back home. The last of them fled Dossor in 1920 via the Far East to get back home to Finland.

A large proportion of original buildings of Dossor have remained intact. The oil resources have been largely depleted, but a few oil pumps can still be seen nodding up and down on the horizon.

The article was first published in Finnish, in the national daily newspaper Helsingin Sanomat, March 25, 2009 and shortly thereafter in English in the international edition www.hs.fi/english. 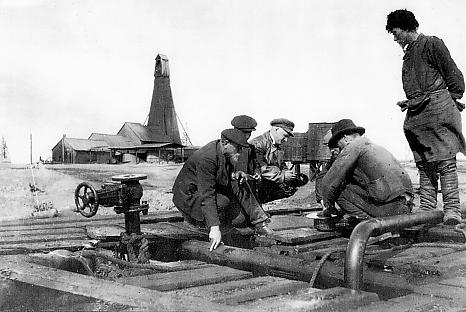 In the Dossor area, Ural Caspian Oil Corporation was the first oil company which also built oil pipes from the oil fields to the shore of the Caspian Sea. Yrjö Nenonen in the middle. The employees of the company represented many nationalities. The languages of mutual communication were Russian, German, French, English, and Swedish. Photo: Ragnar Nyblin. 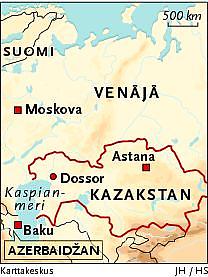 Dossor is on the north-eastern shores of the Caspian Sea. Venäjä = Russia; Suomi = Finland.